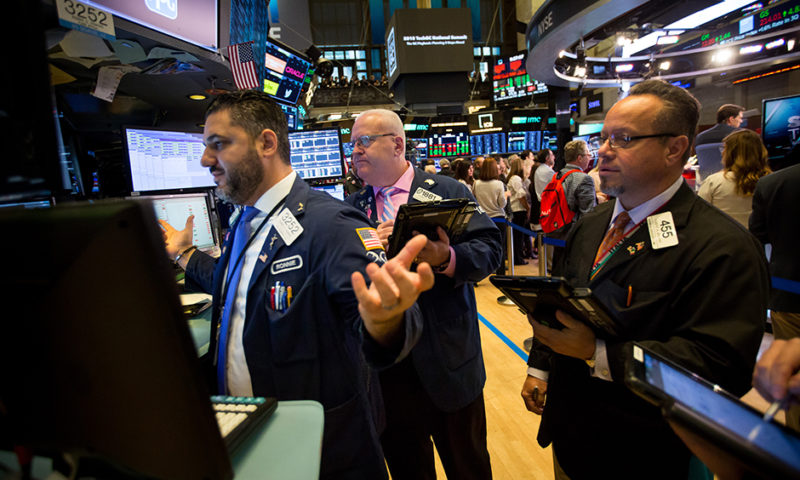 Dubai: US equities may be on a slippery slope due to rising yields and fears of faster than expected rise in rates, but experts say it’s too early to call an end to the market’s nine-year bullrun.
The Dow Jones Industrial Average closed 1.19 per cent lower at 24,688.31, after losing a total of 2.97 per cent in the previous week. The index has shed 6.69 per cent in the past one month, its worst since 2009, on fears of a faster than expected rise in interest rates.

“We expect the Fed to keep hiking at a steady pace but see little reason for them to accelerate tightening. We anticipate equities will be able to cope with the Fed’s gradual tightening and think strong corporate earnings will continue to bolster the US market,” Mark Haefele, Global Chief Investment Officer at UBS said. UBS expects 23–24 per cent earnings growth in the third quarter of 2018.
The Federal Reserve officials remained convinced that continuing to gradually increase interest rates is the best formula to preserve a steady economy, according to minutes of the recent policy meeting from the central bank. However, US president Donald Trump said that the Fed officials were ‘going loco’ with the rate rise, and said that higher rates are the single biggest threat to the economic recovery.
“Over the short term, equities markets are likely to take a breather from the selling momentum of the past three weeks and post a modest rebound into year end,” Vaqar Zuberi, Head of Hedge Funds at Mirabaud Asset Management, said.

The Dow Jones index has shed almost all of the gains registered in the year so far, which analysts say have resulted in a few stocks available at attractive valuations.
“Over the medium term equity markets will perform well as risk free yields settle at 3.20-3.30 per cent levels. Global markets will get used to elevated US 10-year yields,” Phaneendar Bhavaraju, Head – Fx & Global Market Stratgegy at Arrow Capital DIFC, said.

Underperforming gold, which is considered as a safe-haven in uncertain times, may add to gains further.
“The Trump administration may respond to a sustained drop in yuan by launching the fourth round of US tariffs on China. A further escalation of the trade war will likely be a risk-off event, leading to a rally in the safe haven yellow metal,” Vijay Valecha, Chief Market Analyst, Century Financial said.
Chinese yuan fell to its weakest level since December 28, 2016 on Friday, before recovering slightly after a central bank official warned against speculating in the currency. Gold for December delivery gained more than a per cent at $ 1,235.40 an ounce.
Gold futures gained 0.44 per cent last week, and was on course for a fourth weekly gain, its longest winning streak since January.

Kia to return to normal in Q4