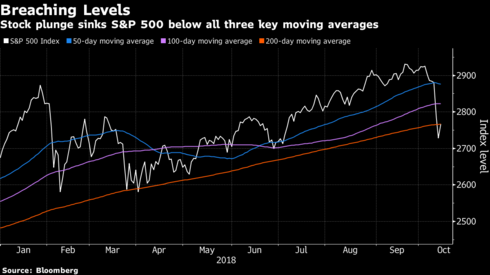 The tumble in equities may go deeper than the correction earlier this year and investors should get ready to sell, according to a Budapest-based fund manager.

“Investors have to start looking for a way out from equities now,” Attila Dzsubak, investment director at MKB-Pannonia Fund Manager, who helps oversee 670 billion forint ($2.4 billion) in assets, said in Budapest. “Past experience shows that exits can quickly become too narrow.”

The S&P 500 resumed its drop on Monday after finance chiefs warned of global economic fragility, and trade tensions between the U.S. and China escalated. Volatility is on the rise as the Cboe Volatility Index, a benchmark for equity turbulence derived from options prices, has an average reading of 15.25 in 2018, up 37 percent from 2017.

Back in February, the S&P slid 3.9 percent in the biggest monthly retreat since January 2016 amid concerns about Federal Reserve policy. The index is heading for a drop of over 5 percent this month.
And Dzsubak has started rebalancing his portolio to make it more defensive by purchasing gold, gold equities and exchange-traded funds investing in precious metals, such as VanEck Vectors Gold Miners ETF and SPDR Gold Shares during the past couple of weeks. Among his rare stock picks, the fund manager bought Facebook shares on the basis that most negative developments at the company have been priced in following a correction that has already lasted for more than two months.

“Everything seems to be working against equities now,” according to Dzsubak, citing stock valuations that are too high as well as the plans of central banks to tighten monetary policies globally. The S&P 500 and the Dow Jones probably reached their peak in October, he said. The indexes may approach this level one last time in the first half of 2019 on the back of an increase in corporate earnings, he said.

In fixed income, Dzsubak likes Mexican bonds as the economy is strong, monetary policy is tight and the country reached a deal earlier this month with the U.S. and Canada to update the North American Free Trade Agreement. He also invests in Hungarian long bonds as robust growth and reined in inflation add to central Europe’s stability due to its low exposure to the U.S. dollar.