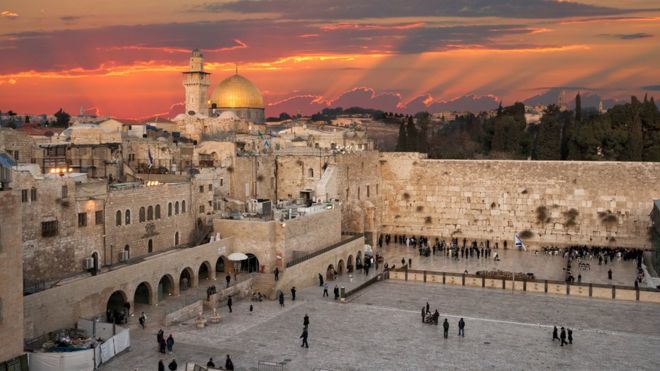 If acted upon, the move would follow a recent policy shift by the US that has drawn criticism internationally.

Political opponents said Mr Morrison’s comments were a “deceitful” ploy for votes ahead of a crucial by-election.

The status of Jerusalem is one of the most contested issues between Israel and the Palestinians.

US President Donald Trump drew international criticism last year when he reversed decades of American foreign policy by recognising the ancient city as Israel’s capital. The US embassy was relocated from Tel Aviv to Jerusalem in May.

Mr Morrison said he would consult with his cabinet and other nations before making any decisions.

“We are committed to a two-state solution, but frankly, it hasn’t been going that well – not a lot of progress has been made,” he told reporters on Tuesday.

He said it may be possible for his nation to support a two-state solution and recognise Jerusalem as Israel’s capital – something that Australia had “to date assumed” was unfeasible.

“Australia should be open-minded to this,” Mr Morrison said.

Mr Morrison’s predecessor, Malcolm Turnbull, had ruled out following the US in moving Australia’s embassy to Jerusalem.

On Tuesday, Mr Morrison said his thinking had been guided by Australia’s former ambassador to Israel, Dave Sharma.

Mr Sharma is the government’s candidate in a by-election, to be held on Saturday, for the seat vacated by Mr Turnbull after he was ousted as prime minister.

If Mr Morrison fails to retain the Sydney electorate, Wentworth, he will be forced into minority government. He denied that his comments on Tuesday were aimed at Wentworth’s large Jewish community.

“[Scott Morrison] is prepared to say anything if he thinks it will win him a few more votes – even at the cost of Australia’s national interest,” she said.

Get Out of Equities Before It’s Too Late, Says Fund Manager