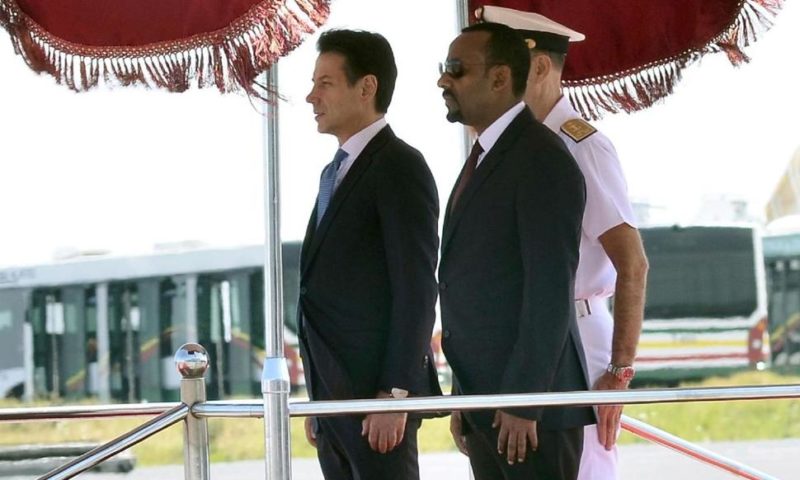 ADDIS ABABA, Ethiopia — Italy’s prime minister on Thursday praised Ethiopia as a “pillar of stability” in the Horn of Africa region as he visited to support the country’s surprising new peace with neighboring Eritrea.

Italian Prime Minister Giuseppe Conte called it the first visit by a Western leader since the restoration of diplomatic ties in July ended years of deadly border tensions. On Friday he will visit Eritrea for talks with its longtime leader.

Conte discussed migration, a sensitive topic back home, as well as investment opportunities in Ethiopia, one of the world’s fastest-growing economies.

In a joint appearance at the National Palace, Conte “warmly” encouraged Ethiopian Prime Minister Abiy Ahmed to continue with the sweeping political and economic reforms that have been announced since Abiy took office in April.

While the reforms have been met with enthusiasm by many Ethiopians, Abiy already has been the target of an assassination attempt and on Wednesday was confronted by dozens of soldiers who demanded a meeting with him over low pay.

The 42-year-old prime minister, a former soldier, once again startled observers by dropping to the floor and joining the red-bereted soldiers in a round of push-ups, defusing the tensions.

Conte said he understood why people in Ethiopia speak of “Aby-mania.”

Abiy, who with the Italian leader did not take questions Thursday evening, said they discussed how to work together on investment, trade and infrastructure development as well as migration issues.

“Over the last few months we have restored peace in the region and we call upon our international partners to seize the momentum and support our regional integration initiatives,” Ethiopia’s leader said.

Conte also was expected to meet with members of the Italian community. Italy was the first country to establish diplomatic relations with Ethiopia in 1889 and its forces occupied parts of the country, including Addis Ababa, in the late 1930s. Eritrea broke away from Ethiopia in the early 1990s.

Eritrea, one of the world’s most closed-off nations, is a major source of migrants heading toward Europe. It is not yet clear how peace with Ethiopia and the recent opening of border posts might affect that.

Mexican man refuses to give up lions on his terrace