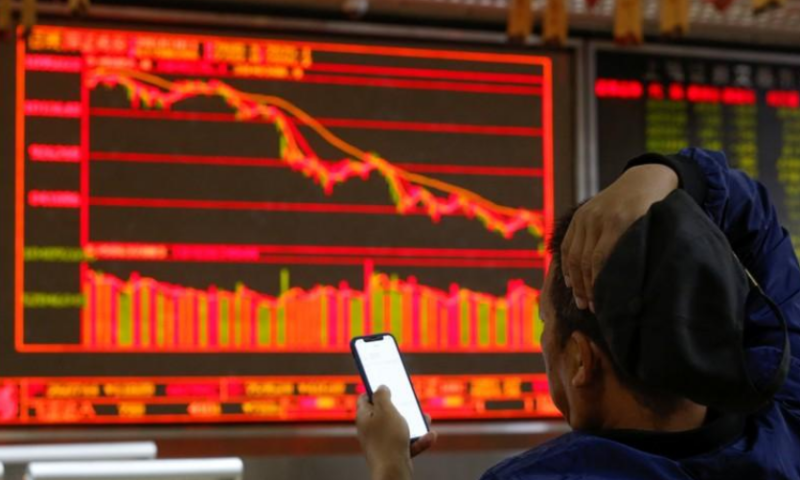 LONDON- A selloff in global stocks tore like a wrecking ball through emerging equities on Thursday with the key index flirting with its biggest daily tumble since the surprise Brexit vote stunned markets in June 2016.

The emerging benchmark is now falling deeper into bear market territory – defined as peak-to-trough losses of more than 20 percent – after first cracking that milestone in August.

Translating this into the index’s market cap, the MSCI benchmark has lost some $1.1 trillion or more than 18 percent of its value – more than double the drop in value global stocks have suffered.

China’s tariff-hit slowdown and weakening yuan are among the causes of the wider emerging market malaise and shares in major Chinese firms are firmly in the firing line. The escalating trade war between Washington and Beijing has cast a large shadow over developing economies partly because many rely on sustained growth in the world’s second largest economy.

“The sharp correction in global equity markets is the inevitable culmination of a number of different factors, but the most significant is the increasingly precarious position of the Chinese economy and financial markets,” said John-Paul Smith, of emerging market consultancy Ecstrat, known for predicting the 1998 Russian crisis and correctly calling the underperformance of emerging market stocks from the end of 2010.

The recent selloff in emerging markets has been driven by a relatively narrow group of stocks, wrote Richard Turnill, global chief investment strategist at BlackRock, the world’s biggest asset manager.

“The 10 bottom performers in the MSCI EM Index (are) accounting for nearly 40 percent of the hit,” Turnill wrote in a note to clients.

Tech shares account for around a quarter of overall market cap for the emerging index. So if technology stocks are taking the most heat in this selloff, emerging markets – and especially emerging Asia – look very vulnerable.

Italy’s PM Visits Ethiopia and Then Eritrea to Support Peace