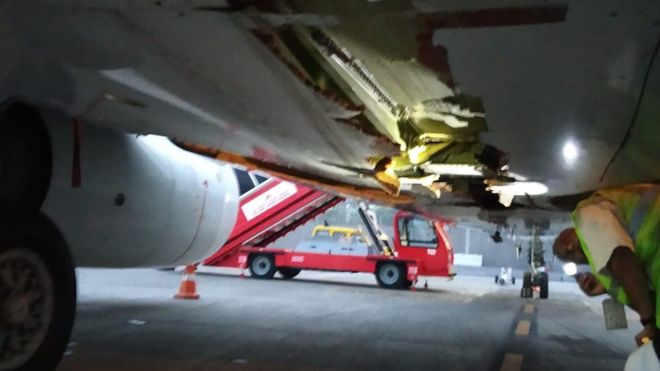 A passenger plane travelling from the south Indian city of Trichy to Dubai sustained damage after hitting the airport wall during take off.

Air India IX 611, which was carrying 130 passengers and six crew members, was diverted to Mumbai, where it landed safely.

Air India said the two pilots, who have more than 6,500 hours of flying experience between them, have been grounded, pending investigation.

The airline said in a statement that the Boeing 737 aircraft took off from Trichy airport in southern India early on Friday when airport officials “observed that aircraft might have come in contact with the airport perimeter wall”.

The aircraft has sustained some damage.

The plane was then diverted to the western city of Mumbai.

The incident has been reported to the aviation regulator and Air India says it is cooperating with the investigation.

It comes weeks after more than 30 passengers aboard Indian carrier Jet Airways had to receive treatment after pilots “forgot” to turn on a switch regulating cabin pressure.

One of India’s oldest airlines, Air India has not turned a profit since 2007.

In June 2017, India’s cabinet approved plans to privatise the carrier. But it failed to attract buyers after the federal government offered to sell a controlling stake.

Any buyer would have to take on about $5bn (£3.7bn) of debt, which is only about half of what the airline owes.

Are there too many people on our planet?