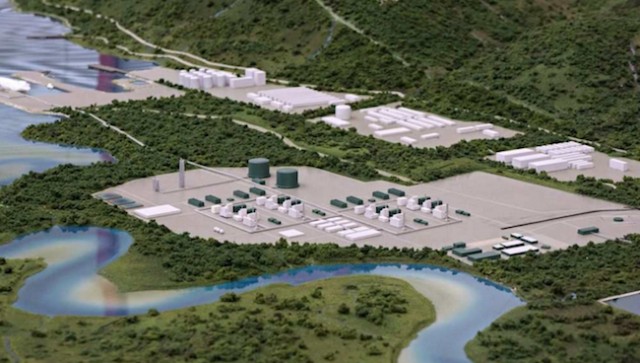 Some see it as a signal of investor confidence in liquefied natural gas megaprojects. Others say it could edge out less competitive LNG proposals in Canada.

Either way, final approval of a massive LNG project in northern British Columbia has renewed interest in the fate of two projects slated for Canada’s East Coast.

Bear Head LNG, a subsidiary of Australia-based Liquefied Natural Gas Ltd., has a site on the Strait of Canso while Goldboro LNG, a Pieridae Energy Canada project, is adjacent to the Maritimes & Northeast Pipeline on Nova Scotia’s Eastern Shore.

Both companies say the decision by five partners — a consortium of state-owned and private investors — to move forward with LNG Canada’s $40-billion joint venture in Kitimat, B.C., bodes well for major resource projects in the country.

But energy consultant Tom Adams says the British Columbia development makes the prospects of a Nova Scotia LNG facility in the near future less likely.

He says there is a finite global market for LNG, and that if the B.C. project moves ahead it weakens other projects.

“Every time there is a new entrant it puts competitive pressure on all the other proposals,” the independent Toronto-based analyst said.

Adams says the “really big boys” have invested in B.C. — Royal Dutch Shell, Mitsubishi Corp., the Malaysian-owned Petronas, PetroChina Co. and Korean Gas Corp. — but the Nova Scotia proposals have yet to attract the same calibre of investors.

“The majors have by and large stayed out of it, and I think that’s another indication of the relative strengths and weaknesses of the development plans,” he said. “It’s another reason for my continued skepticism with respect to LNG in Nova Scotia.”

However, Goldboro LNG has managed to secure a customer.

Uniper SE, a German energy firm, has signed a 20 year off-take agreement for half of Goldboro’s permitted output, a coup for the Nova Scotia project. The contract comes with a German government-backed debt guarantee.

“Given the global nature of the industry, it sends a positive message to the world that Canada is back,” he said in an email, noting that the Goldboro project is aiming for a final investment decision in the first quarter of 2019.

Meanwhile, Micah Hirschfield with LNG Ltd., the proponent of Bear Head LNG, says the Kitimat investment increases the viability of exporting Canada’s stranded natural gas resource from both the West Coast to Asia and the East Coast to Europe.

“The amount of gas being used by LNG Canada barely scratches the surface of the more than 300 years of stranded gas supply that the resource has,” he said in an email.

“Both Western Canadian producers and European customers recognize the importance of being able to export Canadian gas from both coasts and we continue to progress and remain committed to bringing LNG from Bear Head to the global energy market.”

Businesses affected by Belfast Primark fire to get cash