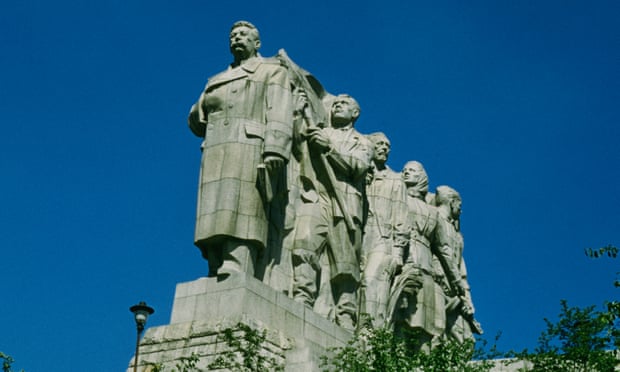 It was once the world’s biggest monument to Josef Stalin, casting a dark shadow over Prague at the height of the communist dictatorship that ruled the former Czechoslovakia.

Now the smashed granite remnants of the notorious statue will form the eerie backdrop to an exhibition highlighting the Czech Republic’s often brutal 20th-century experiences of totalitarianism under Nazism and communism.

Visitors will be given a tour of the central European country’s struggles under oppression just yards from the clearly visible pile of rubble that is all that remains of the 15.5-metre (51ft) sculpture designed as a tribute to the Soviet tyrant when he was at the peak of his powers.

The exhibition, organised by Post Bellum – a group dedicated to preserving Czech historical memory – opens on Monday in an underground chamber directly beneath the hilltop location in Letná Park where the 14,200-tonne statue stood before it was blown up in 1962 after the personality cult surrounding Stalin had been discredited.

It will pinpoint nine landmark events in the national encounters with dictatorship, beginning with Nazi Germany’s invasion of Czechoslovakia in March 1939 and ending with the mass demonstrations of the 1989 Velvet Revolution that ended more than 40 years of communist domination.

One dramatic scene simulates the experience of an RAF fighter pilot in a Spitfire plane engaging a German Messerschmitt in the Battle of Britain in 1940. It is based on the experience of František Peřina, one of several exiled Czechoslovakian flying aces who served with the RAF in the second world war. Most were persecuted by the communist authorities after returning home and Peřina later fled to Canada.

There will also be mock-ups of secret police interrogation cells, where political prisoners were held before the Stalinist show trials of the early 1950s, and a depiction of the church crypt where the British-trained assassins of Reinhard Heydrich, the head of the Nazi occupation authority, were hunted down and killed in 1942.

Outside, a temporary five-metre-high wall has been constructed to resemble the Berlin Wall, but also to symbolise calls by contemporary leaders to build barriers against migrants.

The display is timed to coincide with a host of events marking the forthcoming 100th anniversary of Czechoslovakia’s establishment on 28 October 1918, as the Habsburg empire collapsed in defeat at the end of the first world war.

Featuring oral testimonies, it will run initially until December but organisers hope to use the exhibition to lobby for a permanent publicly funded museum to totalitarianism, something the Czech Republic lacks in contrast to neighbouring countries such as Poland and Hungary.

“The lack of a national museum is embarrassing,” said Mikuláš Kroupka, Post Bellum’s director. “When people visit here and ask where they can go and learn about our recent history and the history of communism, there is nowhere. Prague does have a Museum of Communism but it’s a private enterprise and not really enough.”

The need has become more urgent, campaigners say, because of recent political developments including the growth of the European far right and the return of the Czech Communist party to the fringes of power as a supporter of the minority government of prime minister Andrej Babiš.

The former monument site – now a popular location for skateboarders – is is still commonly referred to as “Stalin’s”, reflecting the Soviet dictator’s enduring impact.

However, the proposal faces opposition from supporters of a rival plan to turn the space into a contemporary art gallery, whose backers include the Prague mayor, Adriana Krnáčová, and Babiš.

Finished in 1955, two years after Stalin’s death, the statue became an embarrassment after he was denounced the following year by his successor as Soviet leader, Nikita Khrushchev. The sculptor, Otakar Švec, killed himself days before it was unveiled.

Ironically, the Letná site also witnessed the biggest anti-communist demonstration in 1989, when hundreds of thousands gathered to demand an end to the regime.

“The place is a symbol of the humiliation of the Czech nation but also of freedom,” said Kroupka. “It’s the perfect location.”

India airports: Has PM Modi built more than others?