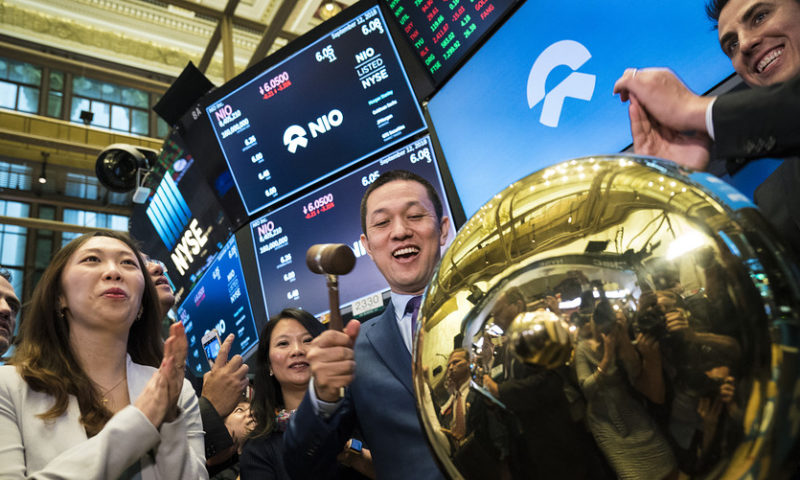 The Dow Jones Industrial Average on Friday notched a second straight all-time high, but a slump in megacapitalization technology and internet-related stocks weighed on the broader market, pressuring the Nasdaq.

Where are the major benchmarks trading?

For the week, the Dow is up 2.3% and on booked its biggest weekly percentage gain since July. The S&P 500 rose 0.9%. Both the Dow and the S&P recorded their second straight weekly gain, as well as their 10th positive week of the past 12. The Nasdaq ended with a 0.3% weekly fall.

Both the S&P and the Nasdaq have hit multiple records over the past few months, thanks in large part to the outperformance of technology and internet stocks. While Apple fueled the Dow’s advance to all-time highs on Thursday, this is a sector the average has less exposure to, a factor that has limited its gains until recently, when industrial stocks have started to lead the market.

Markets have been grinding higher in a low-volatility market for several weeks. The gains have largely been supported by improving economic data, which have pointed to strong economic fundamentals, particularly in contrast to other regions, where stocks have been struggling.

On Thursday, gains came as jobless claims dropped to their lowest since November 1969, a sign of an extremely strong labor market. Separately, the Philadelphia Fed manufacturing index jumped more than expected in September, while an Index of Leading Economic Indicators suggested the U.S. economy could look forward to 3% economic growth in the second half of 2018.

In the latest data, a reading on the manufacturing sector rose to 55.6 in September from the previous reading of 54.7. A report on the services sector dipped to 52.9 from 54.8. Both are from IHS Markit.

These signs of economic strength have been enough for investors to ignore persistence evidence of escalating tensions between the U.S. and China—among other regions—on trade policy. President Donald Trump has announced nearly $500 billion in tariffs on Chinese goods this week; China retaliated with measures of its own and said it would introduce more if the U.S. tariffs take effect.

While many investors are concerned that the trade issue could escalate into a full-blown trade war, they have so far been heartened by the fact that the issue hasn’t shown much impact in economic data or corporate results. Furthermore, some market watchers have said that recent developments haven’t been as severe as expected, leaving room for optimism.

What are market analysts saying?

“We don’t have a full-out trade war, and at this point, most people understand the impact of what’s happened so far won’t be too big on margins. And since earnings and revenue growth are as high as they’ve ever been, it’s perfectly fair for stocks to be at records,” said Peter Lazaroff, co-chief investment officer at Plancorp, which has $3.9 billion in assets.

“However, given that valuations are pretty high, the prospect of our getting a pullback should be at the forefront of investors’s minds. That would just be part of a healthy, functioning market, however. Overall markets aren’t euphoric or complacent about the risks out there.”

Micron Technology Inc. MU, -2.87% shares fell 2.9% a day after it reported strong quarterly results, though it gave an outlook that was below expectations. The results could spark broader weakness in the chip space if it leads to concerns that the sector’s sky-high growth could be coming to an end. The broad semiconductor sector, as gauged by the iShares PHLX Semiconductor ETF, fell 0.3%. Micron is a major component of that popular ETF.

GTx Inc. GTXI, -92.27% plummeted more than 92% after the company said its therapy intended for postmenopausal women with stress urinary incontinence didn’t meet the primary endpoint in a phase 2 clinical trial.

Wells Fargo & Co. WFC, -1.01% late Thursday said it would reduce jobs as part of its “ongoing transformation” to address industry trends and changes in customer behavior. Shares were little changed. Shares of the bank rose by 3.3%.

Where are other markets trading?

Asian stocks rose, with shares in Shenzhen on track for their best week since July and Japan’s Nikkei at its highest level since January.