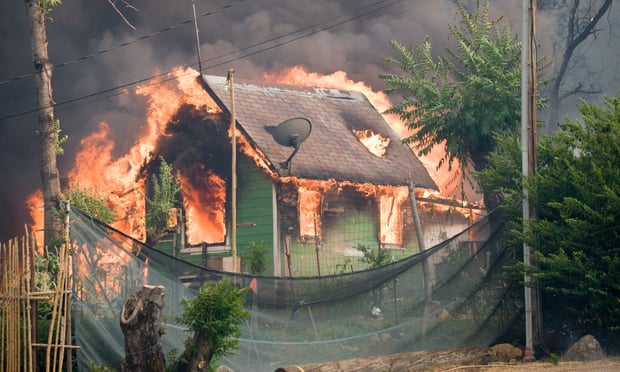 With record-breaking wildfires carving up the American west this summer, firefighters have become the rarest of civil servants: the kind almost universally lauded as heroes. Reinforcements dropped into California’s firefight from as far away as Australia and American Samoa to bolster strained state and federal crews, reaching a high point of 14,000 firefighters on the ground.

Yet other crews have pulled into the fires’ path with a less grandiose purpose: to save only select addresses. These are the private firefighters of the rich or otherwise well-insured: private crews hired by insurance companies to minimize damages and keep policyholders’ homes from going up in smoke.

“This year to date has been busier than any prior years to date,” David Torgerson, the president of the firefighting company Wildfire Defense Systems in Bozeman, Montana, told the Guardian in an email, “and we are expecting to respond to [more] wildfires this year than any prior year.”

This year’s wildfire season has produced the largest burn in California’s history and, in the northern part of the state, an awe-inspiring “firenado”. As scientists say that “megafires” are the new normal, climate change capitalism is finding an increasing number of customers. This echoes a global trend: cottage industries have sprung up to serve those who can afford to be a bit more protected and comfortable while the weather grows more cataclysmic. The uber-wealthy have bought estates in New Zealand (to the point that the country is in the midst of passing legislation to stymy foreign buyers) and luxe underground bunkers in Kansas and elsewhere to escape civic or natural collapse.

In western states, the wildfire-evacuated masses have huddled in Best Westerns or on gymnasium floors and are often locked in insurance-claim limbo, while the affluent check into five-star luxury hotels – usually reimbursable by their insurance – confident that their homes are being looked after.

Ronald DeKoven is a New York-attorney, English barrister, and a tech entrepreneur, regularly flying to London or Singapore, where his startup MyLawyer is headquartered. In 2011, he and his wife, Linda, bought an estate with three guesthouses in the center of a 30-acre Napa Valley vineyard. It was meant as a second home, but after falling in love with wine country, the couple moved in permanently.

Last year, one of his workers texted to report that a blaze, which would eventually become the catastrophic wine country fire, had started just down the road. Within minutes of the text, he and Linda sped away to a friend’s. “We put our shoes on and grabbed coats and left,” he says. “We probably were the first to leave this area. Given that I’ve practiced law for 50 years, you might say I’m cautious.” An insurance crew showed up to remove any combustibles around the house and spray fire retardant around the property’s edges. Meanwhile, the DeKovens checked in at the tony Clift Hotel in San Francisco. Their insurance company, Pure, explained over the phone to the couple that the company would pre-pay the hotel bills.

After a night at the Clift, the DeKovens moved to Four Seasons hotels in Silicon Valley and then San Francisco for three weeks. “Needless to say the bills were high,” DeKoven says. “It was just paid through Pure.”

While many other evacuees were locked in months of bureaucracy with insurance carriers, the DeKovens sailed through the recovery process. When they returned to their stone-and-stucco estate – which escaped the fire – Pure had already filtered the air to get rid of the heavy smoke smell. Pure sent out a team to test for carcinogenic dust in the house, detecting some in the main house’s attic. DeKoven hired their general contractor to vacuum the dust in hazmat suits and replace the insulation – a nearly $50,000 job that Pure pre-paid with a check in the mail.

“I found it astonishing they would be so focused on our best interest,” DeKoven said. Insurance is a suddenly sexy conversation topic in California, and DeKoven has been handing out his adjusters’ name like some others pass around the name of their skilled masseuse.

AIG, the publicly traded insurance carrier, rolled out preemptive wildfire protection in 2005 to their Private Client Group, which the company says serves 40% of the Forbes 400 richest Americans. They were followed by competitors in so-called high net-worth insurance – Chubb, Pure, and Nationwide Private Client, the types of companies who also typically offer insurance for such rarefied concerns as yachts and employment claims made by domestic help. Such coverage tends to keep out the hoi polloi, costing from thousands to tens of thousands or even six figures in annual premiums. Pure typically offers insurance to homes valued more than $1m.

Insurance crews don’t battle back flames like the government-contracted ones do. Their services happen before and after a fire passes. Generally, when a policy is purchased, a risk assessor surveys the property for fire risks. Clients of some plans receive texts about evacuations and the paths fires are taking. When fires are encroaching, crews stop by to cart away flammable objects or brush from around the house that could catch fire from an ember, and sometimes install temporary sprinklers. They might spray flame retardant around a property’s perimeter, and seal vents to keep out drifting embers and smoke. In more dangerous spots, they might spray a house down with fire-retardant gel and even extinguish a spot fire.

To argue against this two-tiered response is to argue against capitalism itself, suggest industry insiders. “Insurance is a capitalist system, by and large, with for-profit companies,” said Amy Bach, the executive director of United Policyholders, a not-for-profit that educates insurance consumers. “So they’re always going to try to compete with each other and offer enhanced value to their higher-end customers who will pay the higher prices.”

Yet Bach added a note of regret, saying she would prefer wildfire fighting “not being a class system, where first class gets a full meal, and in couch you get peanuts”. The high-end insurers market to the exceptionalism of their clients – “families who have more to protect,” as Pure’s website reads. Chubb’s site features a 72-year-old named Gerry in Ventura, California, who escaped the Thomas Fire last year, and contrasts his story with the relative misfortune of his neighbors: “Not only was Gerry treated first class every step of the way, as Chubb clients, he says he and his wife were the only two in their development able to rebuild.”

Still, insurance-dispatched crews are now trickling down to companies with more middle-class clientele. For instance, for the past two years, USAA, a kind of insurance exchange for members of the military and their families, has offered the service to 1.4m properties in Western states. USAA has no home value requirement; they’ll send firefighters out to your “modest cabin”, said a representative.

The head of one privately-held firefighting company, Wildfire Defense Systems of Bozeman, Montana, argued against charges of elitism. Its president, David Torgerson, said that 90% of the policyholders’ homes are the average local market price, and that despite the exclusive image of private firefighting, the service is also offered by several mainstream insurers. He also said that private firefighting can redound to the public good, as more resources on the ground “contributes to the overall effort”. Crews could theoretically pitch in when called upon by incident command.

Even so, when a fire hits, insurance firefighting crews are “treated like civilians, basically”, said Scott McLean, a spokesperson for CalFire, the California firefighting agency. They must get permission from the incident command to proceed into evacuation zones or pass roadblocks, and must leave if ordered to. Private crews do not play a role in the official fire response, he wrote in an email: “It is just another external situation that [incident command] has to deal with.”

Eliza Kerr has lived on the edge of Yosemite national park for two decades, rock-climbing and leading yoga and backpacking retreats through her not-for-profit, Balanced Rock, when not treating clients with ayurvedic medicine. She’s aware that her love of the California’s natural grandeur puts her squarely in the fire zone. Still, she’s betting on the long term. “Yosemite’s been my home for a long time,” she says. “It’s part of the vision.” In fact, she has decided to increase her ties to the area, and is making good on her dream to build a retreat guest residence and a yoga studio amid the scrubby brush overlooking the Merced river.

The buildings were in mid-construction when the Ferguson fire evacuation order hit in mid-July. Kerr was away on a surfing trip in Indonesia at the time, but Chubb’s firefighting crew sprayed retardant around the property’s edge, sealed attic vents, and soaked the all-wood deck with water. They called her husband, who was still in California, with daily updates.

Though these measures lent her peace of mind, Kerr ultimately thanks official state crews for saving her property. “I want to give huge credit and kudos to the local firefighters,” she said. As she heard it, they intentionally burned off vegetation up to her property line, stopping the incoming fire in its tracks. Her dream of a yoga retreat in the middle of wildfire country is safe – for now.

US ‘ready to restart negotiations’ with North Korea

‘Boorish’ tourists in Venice targeted in mooted ‘no sit’ rule