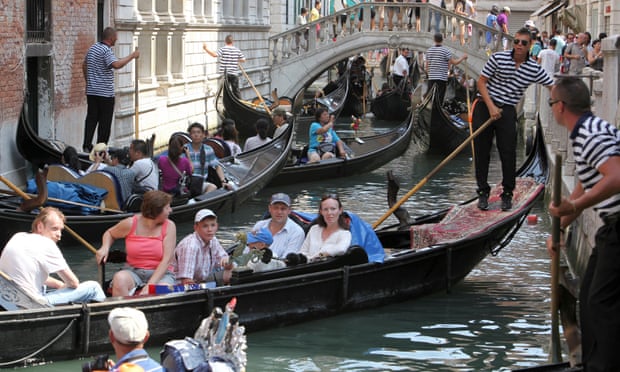 Authorities in Venice have proposed banning people from sitting and lying on the ground as the city pursues its quest to clamp down on what some officials describe as “boorish” tourists.

The potential rule was suggested by the mayor, Luigi Brugnaro, and would mean transgressors being fined between €50 and €500 if implemented.

Sitting down on the steps of monuments or those of the portico that surround St Mark’s square is already banned.

The proposal is expected to reach a vote in the city’s council in October, although it faces opposition from councillors from the Five Star Movement as well as residents’ activist groups.

“There is such a long list of things that are forbidden in Venice there is nothing left that you can do,” said Marco Gasparinetti, who leads the residents’ group Gruppo Aprile 25. “They would need to hire an extra 5,000 officers to properly enforce everything.”

Authorities are also considering banning music on boats, the principal mode of transport for residents. People can already be barred from the city or fined for drunken behaviour and swimming or dipping their toes in the canals. Snacking on steps or while walking along the street are also frowned upon.

Each summer, a group of so-called “angels of decorum” patrol the main tourist areas to ensure people are respecting the rules. Designated picnic areas, away from the hotspots, have been assigned for the purpose of sitting down and eating, although few people are aware of this.

Venice has long struggled to manage a tourism industry that brings in about 60,000 visitors a day, many arriving by cruise ship. Paola Mar, the city’s tourism chief, told the Observer in July that the decorum rules were not about criminalising particular groups but “respecting” the city.