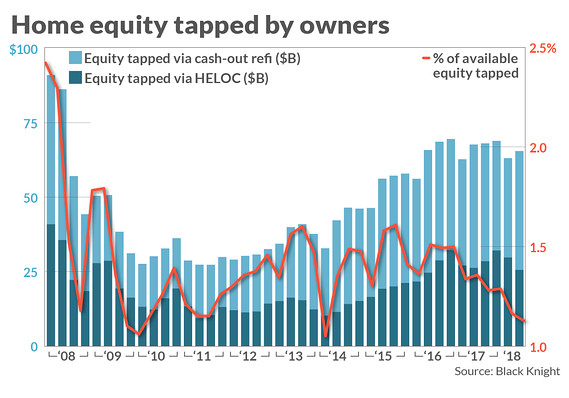 American homeowners have amassed a record $6 trillion in equity in their properties, a figure boosted by surging home prices and a trend of owners staying put longer. But rising interest rates and caution resulting from the housing troubles of a decade ago are limiting how much of that equity is getting tapped.

“Tappable” equity” – that amount of home equity that can be withdrawn and still leave owners with at least 20% equity in their homes – topped $6 trillion for the first time ever in the second quarter, according to real estate data provider Black Knight.

That’s 21% higher than in the pre-crisis peak, from 2006. And it means 44 million households have equity available to them to help pay education costs, renovate the house or anything else they’d like.

But only $65 billion was withdrawn in cash-out refinances or home equity lines of credit in the first quarter, Black Knight reported. That’s more than 3% lower than the same period last year. Black Knight thinks rising interest rates have a lot to do with it: The cost of financing a HELOC averaged 5.83% in the second quarter, up 30 basis points from the first quarter and nearly a full percentage point higher than a year ago.

(By contrast, the 30-year fixed-rate mortgage averaged 4.54% throughout that time, according to Freddie Mac data.)

It’s also the case, as MarketWatch has reported in the past, that Americans are scarred by the housing bust. During the bubble years a decade ago, lenders pushed far too many exotic products that made homes into ATMs.

Even with stricter post-crisis underwriting and rosier fundamentals, many consumers remain exceptionally conservative in their borrowing habits, at least when it comes to their homes. In the most recent week, only 6% of mortgage applications were adjustable-rate, according to the Mortgage Bankers Association.

Meanwhile, rising rates are making it much harder for homeowners to do traditional refinances that allow for lower monthly payments. “Rate refinances” fell 62% in the second quarter compared to a year ago to the lowest quarterly total ever recorded: 106,000, Black Knight said.

Battered bitcoin bulls are latching on to this seasonality chart