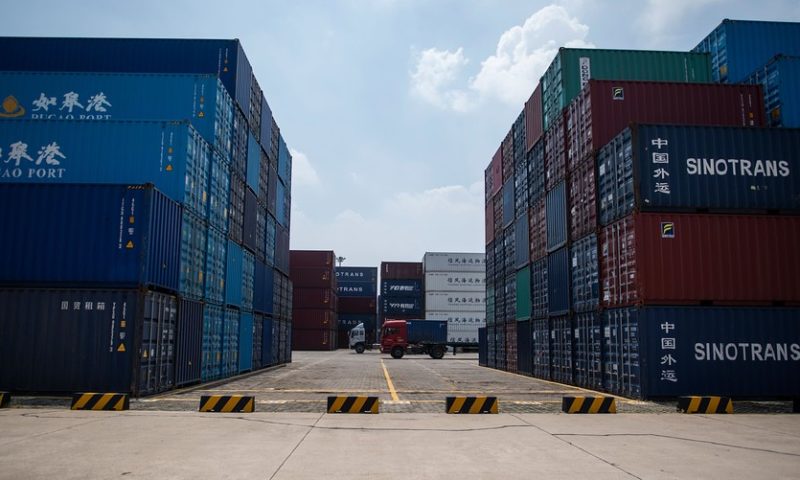 U.S. stocks ended essentially unchanged on Friday, though slight gains were enough to give the S&P 500 its fifth straight positive session, while all three major indexes posted solid weekly gains.

Indexes moved between slightly positive and modestly negative territory throughout the session, following a report that President Donald Trump still wants to impose tariffs on $200 billion of Chinese goods, the latest sign that the trade jitters will continue to hang over financial markets. While stocks initially sold off on the news, they subsequently rebounded, in keeping with their recent pattern.

At current levels, the S&P is 0.4% below its record close set in late August, while both the Dow and the Nasdaq are within 2% of their all-time highs.

The Cboe Volatility Index VIX, -2.43% was on track to fall nearly 19% over the course of the week, its biggest weekly drop since April.

What’s driving markets?
Bloomberg reported that Trump had instructed aides to proceed with $200 billion in tariffs against Chinese products.

The report come on top of billions of dollars of tariffs that have already been levied, as well as a couple of days after the White House invited Chinese officials back to the table to try to hammer out a trade deal. That meeting could take place by the end of the month.

While investors have largely shrugged off the trade issue, focusing instead on strong corporate profits and economic data, there is still a concern that the issue could escalate and have a pronounced impact on global economic growth.

Separately, Hurricane Florence was making landfall on the coastline of the Carolinas Friday. According to CoreLogic estimates, wind and storm surges from the hurricane were estimated to cause property losses between $3 billion and $5 billion. The slow-moving storm was downgraded to a Category 1 storm, but still with forecasts for “catastrophic” floodwaters.

What are strategists saying?
“Trade wars are certainly a concern, but I don’t know that they’re a one-moment-in-time thing. So far we’ve looked past them, but over the longer term a trade war could be very damaging,” said Richard Weeks, managing partner at VWG Wealth Management, which has about $1.4 billion in assets.

Despite that, Weeks said he remained cautiously optimistic about stocks. “Between high corporate profits, stock buybacks, and muted interest rates, there’s still an underlying bid to the market no matter how you slice it. There are still plenty of things to be concerned about, but there aren’t enough reasons to be too pessimistic,” he said.

“I’m not throwing money into stocks by the fistful, and our base case is that future returns aren’t great, but stocks still look better than bonds, and there are enough positives that you can’t be too negative,” he said.

Which economic reports are in focus?
U.S. retailers posted the weakest sales in August in six months, as only an increase in purchases at gas stations prevented an outright decline. However, the soft patch in spending is seen as unlikely to last. Retail sales rose a scant 0.1% in August, the government said Friday. Economists polled by MarketWatch had forecast a 0.3% increase.

Meanwhile, the import price index sank 0.6% in August, marking the second straight month and the biggest drop in 2 ½ years for the cost of goods imported into the country, largely reflecting lower oil prices. A report on industrial production for August showed a rise of 0.4%, the Federal Reserve reported, representing the third monthly increase.

Separately, the confidence of Americans in the U.S. economy and their own well-being rose toward the end of summer and stood near a 14-year high. Business inventories rose 0.6% in July.

On the Federal Reserve front, the Chicago Fed’s Charles Evans said that central-bank officials share a common forecast of an economy expanding at a solid rate over the next several years, with the unemployment rate declining and inflation edging up a bit above 2%.

Which stocks are in focus?
Marijuana-related stocks were volatile following a report that the U.S. government may ban those who invest or work in the industry or use pot could face a lifetime ban on entering the U.S. Shares of Tilray Inc. TLRY, -8.94% slumped 8.9%, while Cronos Group Inc. CRON, +2.67% was up 2.7%. The ETFMG Alternative Harvest ETF MJ, +1.25% an exchange-traded fund with a cannabis theme, rose 1.3% in volatile trading. The Horizons Marijuana Life Sciences ETF HMMJ, +3.76% rose 3.8% on the Toronto exchange.

Shares of NiSource Inc. NI, -11.72% fell 11.7% after news reports said customers of one of the company’s seven regulated utilities, Columbia Gas of Massachusetts, were asked to evacuate following gas-related explosions in towns outside of Boston.

What are other markets doing?
European stocks SXXP, +0.35% traded higher, while Asian markets also had a mostly positive session.

Gold futures GCZ8, -0.82% ended lower, while U.S. oil futures CLV8, +0.57% gained ground on concerns about renewed sanctions on Iran and the impact of Hurricane Florence and other storms. The ICE U.S. Dollar Index DXY, +0.43% gained some altitude in an otherwise downbeat week for the greenback.

Equities to Fall as Much as 20% If China Trade War Intensifies: David Tepper

A Hindenburg Omen is forming in the stock market. Should investors ignore it?