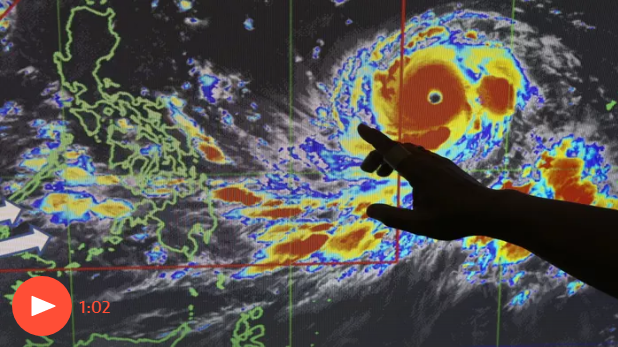 The Philippines is bracing for Typhoon Mangkhut, the most powerful storm this year, with millions living in its path and fears its rains could combine with monsoonal storms that could spark landslides and flash flooding.

Philippines officials have ordered evacuations and closed schools and offices as Typhoon Mangkhut approached, carrying sustained winds of 265km/h (165mph) and gusts of up to 325km/h (201mph). It is forecast to make landfall on Saturday.

The Philippine Red Cross said its emergency workers were on standby. Richard Gordon, its chairman, said: “We’re worried for the 10 million people in the Philippines living in the path of this destructive storm, including those who have been displaced several times due to the monsoon rains last July and August.”

Farmers are racing to harvest their crops before the storm hits, with northern Cagayan province to first to be affected.

With a massive rain band 900km (560 miles) wide, combined with seasonal monsoon rains, the storm could bring “heavy to intense” rains that could set off landslides and flash floods, Mendoza said.

After leaving the Philippines, the fast-moving storm is expected to blow toward southern China on Sunday if it maintains its course, forecasters said.

Manuel Mamba, the governor of Cagayan, said northern coastal and island villages were being evacuated on Thursday ahead of the expected onslaught. He said classes in schools would be suspended Thursday and offices, except those involved in rescue and relief work, would be advised to close on Friday.

In 2016, a super typhoon lashed southern parts of Cagayan, destroying tens of thousands of houses. Mangkhut is blowing from the Pacific and forecast to directly hit the province’s north-eastern coastal and island municipalities, Mamba said.

“I’m stressing that this one is very different, this is more complicated because of possible storm surges,” Mamba said, referring to giant waves whipped inland by a typhoon.

The typhoon is arriving at the start of the rice and corn harvest season in Cagayan, a major agricultural producer, and farmers were scrambling to save what they could of their crops, Mamba said. The Philippines has been trying to cope with rice shortages.

“The worst case are those areas which will be directly hit by strong winds that can topple houses, storm surges and heavy rains that can cause flooding, and there may be landslides in higher areas,” Jalad said.

A missile test aboard a navy ship to be attended by president Rodrigo Duterte off northern Bataan province was cancelled due to the approaching typhoon.

Mangkhut is the 15th storm this year to batter the Philippines, which is hit by about 20 storms a year and is considered one of the world’s most disaster-prone countries.

Typhoon Haiyan left more than 7,300 people dead or missing and displaced more than 5 million in the central Philippines in 2013.