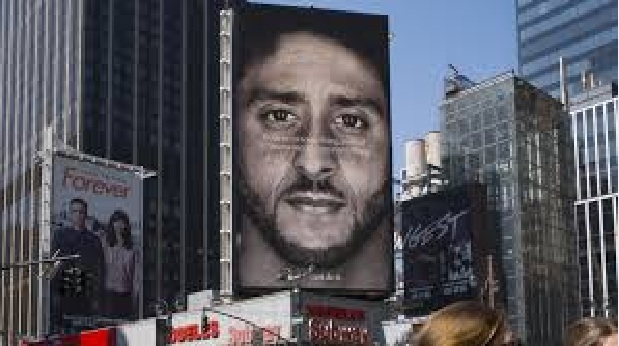 The company’s brand exposure on TV, radio, online and social media since first announcing the campaign is worth $163.5 million, according to Apex Marketing. Kaepernick on Monday tweeted a photo of the advertisement he’s featured in, and Nike dropped a commercial that Kaepernick narrated Wednesday.

Kaepernick has become a polarizing figure in the sports universe ever since he decided not to stand for the national anthem during a 2016 National Football League preseason game to protest racial injustice. He’s not currently signed with an NFL team and has since charged that the league conspired to prevent him from getting signed to a team when he became a free agent. The NFL denies the allegation. A hearing is expected on the matter before the end of the year.

Some have praised Nike for taking a stand on a social issue. Younger consumers, especially millennials and Gen Z, are demanding more of this from brands. Others have chastised Nike, prompting the hashtag #NikeBoycott to trend on Twitter.

Apex found $49.1 million of Nike’s brand exposure was negative, $48.8 million was neutral and $65.6 million was positive, totaling $163.5 million overall. The campaign is for Nike’s 30th anniversary of “Just Do It.”

Nike shares fell 3 percent Tuesday on word of the campaign, but the stock is still up more than 51 percent over the past 12 months. On Thursday, shares were up less than 1 percent.