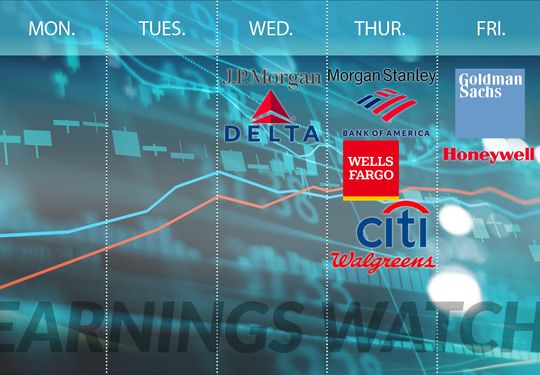 EarningsWatch: After the first half produced more profit than the S&P 500 had ever seen in a six-month period, expectations for the most profitable year ever face questions amid current difficulties

Corporate earnings reached a record in the first half of 2021, and analysts expect that the rest of the year will add up to yet another record-breaker.

There are some concerns about that path, however. Namely, the issues that industries are experiencing as staffing shortages impact the supply chain, which could hurt the ability of retailers to get enough goods to sell to consumers this holiday season.

As earnings season kicks off this week, analysts expect that S&P 500 SPX earnings will increase 27.6% year over year, which seems strong until you compare it with the two previous quarters — earnings increased 52.8% in the first quarter and 92.4% in the second quarter, as companies lapped the beginning of the COVID-19 pandemic. Those two quarters produced the largest net income on record for a six-month period, according to Dow Jones Market Data, which has records dating back to 2008.

Expectations are for the second half — which is typically bigger, thanks to back-to-school and holiday shopping — to produce the biggest profit for the year as well. But companies are starting to get nervous about the supply-chain issues that have popped up and could get in the way of continued earnings power.

So far this young earnings season, 21 companies have reported third-quarter earnings, and nearly three-fourths of them — 15 of the 21 — have mentioned negative effects of supply-chain disruptions in their earnings calls, FactSet Senior Earnings Analyst John Butters wrote in a note Friday. Just behind, with 14 of the 21, was staffing issues and labor costs, which are believed to be at the heart of the supply-chain issues.

Those issues could show up in many places, including lost revenue from the inability to obtain goods and services to sell to consumers or companies, but also in the costs that companies must bear. For instance, large retailers such as Walmart Inc. WMT, Target Corp. TGT, Home Depot Inc. HD and Costco Wholesale Corp. COST have taken to chartering their own ships to ensure supply, which will show up in their costs and could cut into profit.

For investors, the prospect of supply-chain and staffing issues getting in the way of an earnings beat is not a small matter. The S&P 500 is trading well ahead of its five- and 10-year average for forward price-to-earnings, as Butters pointed out, with a forward P/E of 20.5, though that number is at one of its lowest points of the past 18 months.

Butters pointed out the still elevated P/E ratio is partly because investors expect companies to beat on earnings, as they have historically. During the past five years, actual earnings for the S&P 500 have outpaced expected earnings by 8.4% on average, leading the earnings growth rate to top the expected rate by an average of 7.2% throughout the earnings season. Those numbers have exploded higher in the past five quarters, however, as concerns about the COVID-19 pandemic have failed to show up in corporate earnings results, with outperformance in that period hitting 19.1% on average, according to Butters.

DataTrek Research co-founder Nicholas Colas wrote in a Monday morning research note that companies will have to come closer to the second number than the first to see any gains for stocks in the coming months.

“The companies of the S&P 500 need to beat by an aggregate 10 percentage points this quarter, or we’ve almost certainly seen the highs on U.S. equity markets for the year,” he wrote.

The flood of reports really kicks off this week, with banks and other early reports.

The number(s) to watch

“Investors would do well to view per-share earnings carefully, because banks have been shifting loan loss reserves that they built up in the early days of the COVID pandemic to their bottom line as the economy has improved,” Gelsi wrote. “This practice allows banks to operate within regulatory boundaries around loan loss reserves, while providing a lift to beat their quarterly EPS estimates.”

Earnings from the financial sector are expected to grow more than 17% in the third quarter, while sales are expected to increase at half that rate, 7.5%. The banking subsector specifically is only expected to show sales growth of 1.6%, while profit is expected to rise 22.8%, according to FactSet.

Bank stocks were pretty sedentary in the third quarter, as investor figured out the trick. To find another leg higher, banks are going to have to prove they can still win loan business that is getting siphoned off by some of the next-generation financial-technology players in the market. Look for figures and commentary on that dynamic as the season plays out.

The calls to put on your calendar

The trucking industry has been on an extreme uptick as the goods coming into ports need to move across continents, but staffing issues have become a larger concern, as has the longevity of the increase.

“Investor sentiment is increasingly of the belief that every record quarter that passes brings the trucking upturn one quarter closer to peaking and the inevitable downturn; yet, that important inflection point keeps getting pushed to the right, with the stronger-for-longer freight backdrop showing no end in sight,” Evercore ISI analysts wrote last week.

Look for earnings from JB Hunt on Friday morning for more insight.

This week in earnings

Four of the 30 Dow Jones Industrial Average DJIA components are on track to report this week, while 18 S&P 500 companies are expected to reveal numbers. Outside of the major indexes, keep an eye out for Alcoa Corp. AA, which used to matter a lot more than it does now.

Americans Quit Their Jobs at a Record Pace in August