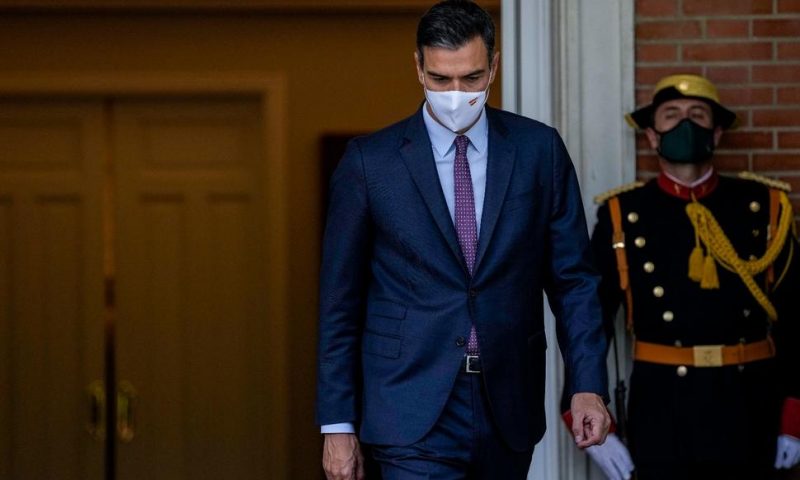 Spain’s Socialist-led coalition government is slashing energy taxes and imposing a temporary windfall tax on the gains of energy companies in an attempt to drive down household electricity bills, which have surged to record highs and triggered an outcry.

MADRID — Spain’s Socialist-led coalition government said Tuesday it is slashing energy taxes and imposing a temporary windfall tax on the gains of energy companies in an attempt to drive down household electricity bills, which have surged to record highs and triggered an outcry.

Environment Minister Teresa Ribera said the government’s urgent measures are in response to an “unprecedented” situation which has emerged at a “sensitive” time — as the economy strives to recover from the effects of the COVID-19 pandemic and as winter approaches.

Household electricity prices have climbed by 35% over the past year, Spain’s statistics agency said Tuesday.

Surging domestic energy prices are also an issue in other European countries, with Ribera recently sending a letter to the European Union’s executive branch stressing the need to change how the bloc’s electricity market works.

The galloping price increases in Spain have brought public anger and pressure on the government from consumer associations.

Wholesale electricity prices in Spain are currently more than 250% higher than one year ago.

The staggering rise continued Tuesday, when the average wholesale price smashed its previous record and reached 173 euros ($204) for a megawatt-hour of electricity — 19 euros ($22.4) more than the previous day. The increase will be felt keenly in Spanish households, which largely use flexible rates.

The Spanish government’s package of measures to address the steep rise includes a new tax through March on energy companies’ windfall gains, which are a result of the way wholesale power prices are calculated.

Officials say that in daily power auctions the government pays all the megawatts it buys from different power sources at the highest price of them all. That is usually gas-generated electricity, whose price has soared.

Consequently, even if power is produced from cheap renewable energy, the companies are getting paid for it at the same price as much more expensive gas — meaning artificially high prices and windfall gains.

The government wants to tax those “exceptional gains,” hoping to collect 2.6 billion euros ($3 billion) over the next six months which will be passed on to consumers.

That measure brought a rebuke from Pablo Casado, the leader of the main opposition conservative Popular Party, who likened it to the “expropriation” of private assets.

The measure also helped drive down the share prices of energy companies on the Madrid stock exchange Tuesday. Shares in Endesa, Spain’s biggest energy company, fell by 2.6% in morning trading.

The government is also scrapping a 7% tax on power generation. Utility companies pass on the cost of that tax to their customers. A separate energy tariff on consumers is to be cut to 0.5% from 5.1%

The government recently cut the sales tax on household energy, from 21% to 10%, through the end of this year.

The electricity price accounts for only one fourth of household utility bills. The rest is made up of distribution costs and taxes.

Ribera, the environment minister, said the package of measures aims to reduce household electricity bills by 22% a month through the end of the year and bring the total annual electricity cost for households down to 2018 levels — a goal which analysts say will be hard to achieve.

The government expects gas prices to begin falling by next March, Ribera told a news conference.