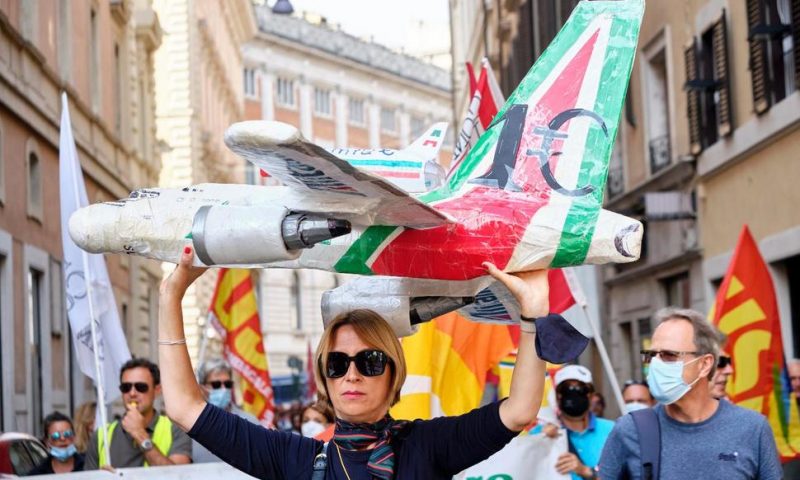 The European Commission has cleared an injection of Italian funds into new airline ITA and says the company won’t be responsible for illegal state aid granted to predecessor Alitalia.

BRUSSELS — The European Union’s competition watchdog on Friday cleared an injection of Italian government funds into new national flag carrier ITA, and said the company would not be held accountable for illegal state aid given to its predecessor Alitalia.

Just a month before ITA takes to the skies, the European Commission — which polices anti-trust and competition issues in the 27-nation EU — said capital totaling 1.35 billion euros ($1.6 billion) that Italy intends to grant the new venture is in line with market conditions and cannot be considered as illegal state aid.

The commission said ITA will operate less than half of the aircraft now run by Alitalia — which has been in the red for more than a decade — and only parts of its handling and maintenance businesses. ITA will also drop its predecessor’s loss-making routes.

At the same time, Brussels ordered the Italian government to recover 900 million euros ($1.01 billion) from Alitalia, saying that a probe concluded that the money constitutes illegal state aid. But it’s unlikely that all the money, which is supposed to come from the sale of company assets, will ever be recovered.

“Today marks a fresh start for Italy’s air transport, which had to overcome many challenges,” commission Executive Vice-President Margrethe Vestager said. “Once ITA takes off, it is for Italy and the management of ITA to make use of this opportunity, once and for all.”

Alitalia has been in deep financial trouble since 2008. The airline was in desperate need of funds in 2017 but had lost its access to credit markets due to its woes. To keep it afloat, the Italian government stepped in, providing two loans of 600 million and 300 million euros.

At the same time, the carrier entered special bankruptcy proceedings. The following year, the commission opened a probe into the government loans.

“The two loans gave Alitalia an unfair advantage over its competitors on national, European and world routes. Hence, they constitute illegal state aid, and must now be recovered by Italy from Alitalia,” Vestager said in a statement.

But the question is moot, given that Alitalia is exiting the market anyway.

Italy’s Economy Ministry announced in July that a new airline to replace Alitalia would launch on Oct. 15. Alitalia’s last flights are expected to operate up until then. The ministry said the new carrier would be ITA, which stands for Italia Trasporto Aereo, or Italy Air Transport.

With the first ITA flights just weeks away, the Italian government is still trying to reach an agreement with Alitalia unions whose members risk losing their jobs.

Under EU rules, the slimmed down new airline can only hire a fraction of the bloated Alitalia workforce. A new round of talks with the finance ministry was scheduled for Friday.

Alitalia has some 10,000 employees. The new company may take on some of the staff, who in recent years staged strikes to demand more attention to the airline’s future. In recent months, they also faced uncertainty over getting paid on time.

The deal to create ITA also calls for slashing the number of slots, especially at Rome’s main, Leonardo da Vinci airport. Milan’s Linate Airport, popular with business travelers since it is close to Italy’s financial and fashion industry capital, will also see some slots reduced.

Among its routes, ITA plans to operate flights to New York from Milan and Rome, and to Tokyo, Boston and Miami from Rome. Destinations from Rome and Milan’s Linate airport will include Paris, London, Amsterdam, Brussels, Frankfurt and Geneva.

US Raises Penalties for Mask Violations on Planes, Transit