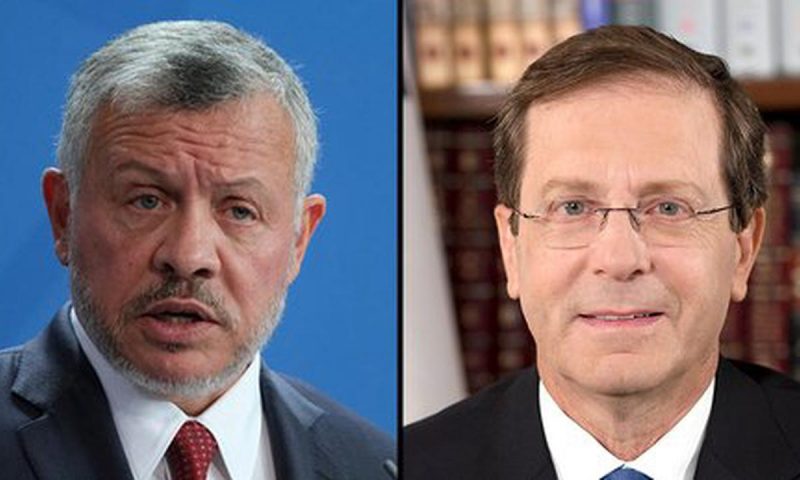 The new Israeli president has met with the Jordanian king in a new sign of improved relations between the two countries.

JERUSALEM — Israel’s president met with the Jordanian king this past week, in a new sign of improved relations between the two countries, the president’s office said Saturday.

At the king’s invitation, new President Isaac Herzog met King Abdullah II at his palace in the Jordanian capital, Amman, Herzog’s office said in a statement. The two discussed a series of political and economic issues including energy and sustainability.

“Jordan is a very important country. I have immense respect for King Abdullah, a great leader, and a highly significant regional actor,” Herzog was quoted as saying following the meeting.

In his statement, Herzog spoke of improving regional relations and the success of the so-called Abraham Accords in which Israel last year normalized diplomatic ties with Bahrain, Morrocco, Sudan and the United Arab Emirates.

On Thursday, King Abdullah II along with the president of the Palestinian Authority, Mahmoud Abbas attended a trilateral summit held by Egypt’s president, Abdel Fattah el-Sissi. The leaders discussed the elusive two-state solution to the conflict with Israel, vowing their commitment for Palestinians to have a right to an independent state.

Israel and Jordan made peace in 1994 and have close security ties. However, diplomatic relations have been strained in recent years over tensions at the Al-Aqsa compound in Jerusalem, and Israel’s expansion of Jewish settlements in the occupied West Bank.