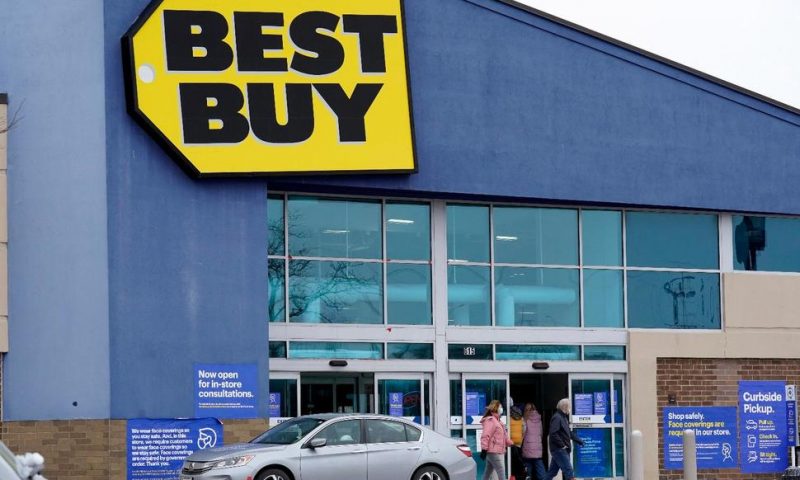 NEW YORK — Best Buy raised its sales outlook for the year Tuesday after breezing past Wall Street expectations in the second quarter.

The nation’s largest consumer electronics chain joined other major retailers including Walmart, Target and Macy’s in putting up banner numbers, suggesting that Americans have continued to be spend even as the delta variant spreads. Department store chain Nordstrom also upgraded its annual revenue outlook Tuesday after reporting fiscal second-quarter results that beat expectations.

But shares of Seattle-based Nordstrom fell nearly 8%, or $2.86, to $34.95 in extended trading after it issued its quarterly report. Investors appeared disappointed with Nordstrom saying that its quarterly sales were still below the pre-pandemic 2019 period.

There have been concerns that consumer spending, which drives 70% of U.S. economic activity, would begin to slow again as it did early in 2020 when COVID-19 first hit the country.

Best Buy CEO Corie Barry, however, said there has been an impact from the spread of the delta variant. Younger shoppers who had begun to return to stores with the arrival of vaccines are now moving back to online shopping, particularly in urban areas. Foot traffic in stores outside of urban areas is stronger, Barry said.

Best Buy, based in Richfield, Minnesota, was somewhat insulated from the economic fallout last year because so many people stuck at home stepped up spending on webcams, laptops and other technology.

That pace, according to the numbers from Best Buy’s most recent quarter, has continued. Now the company is readying itself for potentially permanent changes in consumer behavior even as millions of people get vaccinated and plan a return to the office. Many will be adapting to hybrid work at home and at the office, and they’re embracing technology with similar gusto for their children even when they were learning online last year.

“Over the longer term, we are fundamentally in a stronger position than we expected just two years ago,” said Barry in a prepared statement. “There has been a dramatic and structural increase in the need for technology.”

As with other retailers, online shopping that spiked in the pandemic has eased with more people Online revenue at U.S. stores fell 28.1% in the second quarter compared with the same period a year ago. Online sales accounted for 31.7% of all revenue compared with 53.1% last year. Two years ago, however, online sales made up only 16% of total revenue.

Best Buy earned $734 million, or $2.90 per share, for the three-month period ended July 31. Adjusted for one-time gains or losses, per-share earnings were $2.98, easily eclipsing per-share projections of $1.91 from Wall Street, according to Zacks Investment Research.

For the current quarter ending in November, Best Buy said it expects revenue in the range of $11.4 billion to $11.6 billion. Analysts surveyed by Zacks had been expecting revenue of $10.49 billion.

The company expects full-year revenue in the range of $51 billion to $52 billion. Analysts expected $49.39 billion for the year, according to FactSet.

Best Buy also said it now expects comparable sales for the year to rise 9% to 11% compared with the previous outlook of 3% to 6%.

Modest Gains Nudge Nasdaq Above 15,000 for the First Time

TikTok to Let Users Shop Through App With Shopify Deal