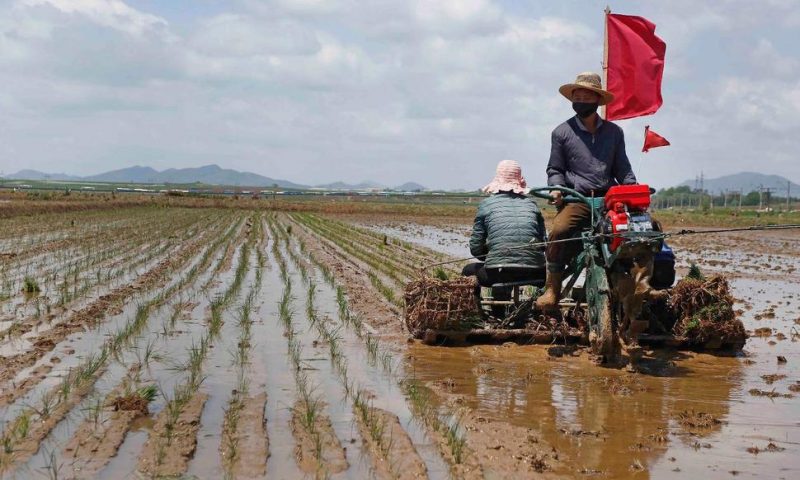 The country’s moribund economy is continuously being battered by the protracted COVID-19 pandemic, and while mass starvation and social chaos have not been reported, observers expect further deterioration of North Korea’s food situation until the autumn harvest.

Seoul’s National Intelligence Service told a closed-door parliamentary committee meeting that North Korea is supplying rice reserved for wartime uses to citizens left with little food, other laborers and rural state agencies, according to Ha Tae-keung, one of the lawmakers who attended the session.

Ha cited the NIS as saying an ongoing heat wave and drought have wiped out rice, corn and other crops and killed livestock in North Korea. The NIS said North Korea’s leadership views fighting the drought as “a matter of national existence” and is focusing on increasing public awareness of its campaign, Ha said.

The price of rice, the most important crop in North Korea, once doubled from early this year. The price briefly stabilized in July before soaring again, Kim cited the NIS as saying.

Ha said North Korea is trying to control the price of grains to which its public is most sensitive.

The lawmakers didn’t elaborate on North Korea’s food situation or actions it was taking.

But Kwon Tae-jin, an expert at the private GS&J Institute in South Korea, said North Korea is likely releasing the military reserves to sell at a cheaper price than at markets to stabilize prices. He said rice prices are “considerably unstable” in North Korea because the government has a limit in supplying such rice.

North Korea had similar food shortages in past years before the pandemic, according to Kwon, but its needs were met by the smuggling of rice and other grains via the North’s porous border with China. But the North’s ongoing pandemic-caused border shutdowns made it extremely difficult for such smuggling to happen, worsening this year’s food shortage, Kwon said.

The NIS has a spotty record in confirming developments in North Korea, one of the world’s most secretive countries. But its latest assessment came after North Korean leader Kim Jong Un admitted his country faces the “worst-ever” crisis due to the pandemic and other difficulties and even a possible dire food shortage.

During a key ruling party meeting in June, Kim urged officials to find ways to boost agricultural production, saying the country’s food situation “is now getting tense.” Earlier, he even compared the ongoing pandemic-related difficulties to a 1990s famine that killed hundreds of thousands.

Kwon said North Korea’s current food problem will continue until it harvests corns, rice and other grains in September and October. But he said North Korea won’t likely suffer a humanitarian disaster like the 1990s famine, during which he said the public found little grains left at most markets. Currently, he said North Korean citizens can still buy grains at an expensive price at markets if they have money.

Other experts say China, North Korea’s main ally and aid benefactor, also won’t likely let a massive famine happen in the North. They say China worries about North Korean refugees flooding over the border or the establishment of a pro-U.S., unified Korea on its doorstep.

PepsiCo to Sell Tropicana, Other Juices, in $3.3B Deal