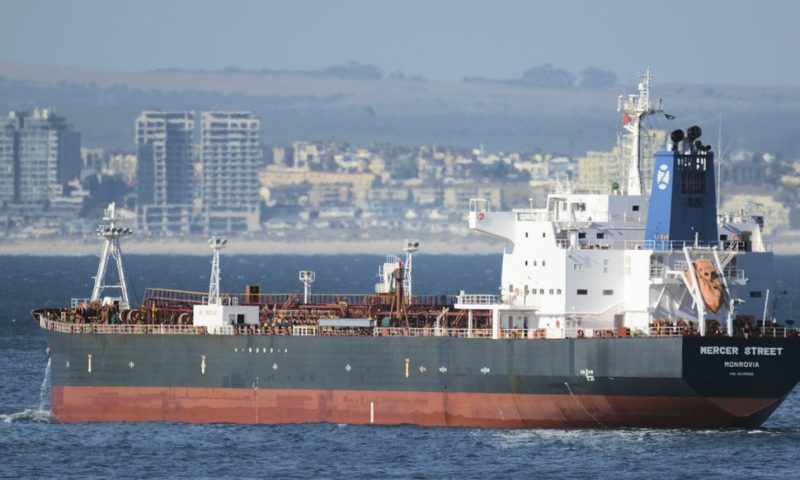 Iranian leaders referenced Israeli and U.S. attacks on Iranian vessels during the Trump administration while also denying ties to the fatal strike in the Arabian Sea.

Iran on Monday denied any connection to a deadly attack last week against a tanker with ties to Israel, Japan and the U.K. while also appearing to justify retribution for what it describes as Israeli and U.S. raids during then-President Donald Trump’s administration on its own ships.

“Trump and his team stood to prevent us from selling even one barrel of oil,” Iran’s First Vice President Eshaq Jahangiri said at a meeting of high-profile Iranian officials on Monday morning. “They exploded or damaged 12 of our oil tankers. The Israelis stepped onto one of our oil tankers and exploded it.”

Jahangiri offered little evidence for the claims, which were carried by Iranian state news service Fars in a post that repeated denials of involvement in the attack on the tanker Mercer Street near the coast of Oman on Thursday. U.S. and Israeli officials have attributed the attack to a one-way drone, which Iran has used with increasing frequency in recent months.

“We are confident that Iran conducted this attack, which killed two innocent people, using one-way explosive UAVs, a lethal capability it is increasingly employing throughout the region,” Secretary of State Antony Blinken said in a statement on Sunday, adding the U.S. and Israel are considering “next steps.”

The Mercer Street is Liberian-flagged, owned by a Japanese company and is managed by a British company that is owned by an Israeli billionaire. A Romanian national and a British national reportedly died in the attack.

In addition to potential new sanctions against Iran, The Wall Street Journal reported on Sunday that the U.S. retribution will focus on Iran’s use of drones and missiles to conduct precision strikes. Its proxy forces in Iraq have carried out multiple attacks against U.S. forces based there in recent months.

Israel Prime Minister Naftali Bennett tweeted over the weekend that his government has absolute proof that Iran was behind the attack.

“Once again we see that Iran threatens peace all over the world,” Bennett wrote. “The more we stand together to confront Iranian aggression, the more effective we will be in putting an end to it.”

Blinken’s statement was unusually forceful for an official in the Biden administration, which has prioritized diplomatic engagement with Tehran as it seeks to restore the 2015 deal limiting Iran’s nuclear program from which Trump unilaterally withdrew.

“There is no justification for this attack, which follows a pattern of attacks and other belligerent behavior,” Blinken said. “These actions threaten freedom of navigation through this crucial waterway, international shipping and commerce, and the lives of those on the vessels involved.”

Iran, however, believes it has been unnecessarily provoked by the U.S. and its allies. Jahangiri in his remarks Monday morning referenced an April incident in which the Saviz, an apparent “spy ship” employed by the Islamic Revolutionary Guard Corps, was damaged by an explosion in the Red Sea. Reporting at the time indicated Israel had told the U.S. it was behind the attack.

A spokesman for Iran’s foreign ministry called Israel’s latest claims about the Mercer Street to be “childish.”

“The officials of the Zionist regime should know that they cannot cure their pains with such blame games,” Saeed Khatibzadeh said Sunday.

India’s Monsoon Rains Forecast to Be Average in August, September