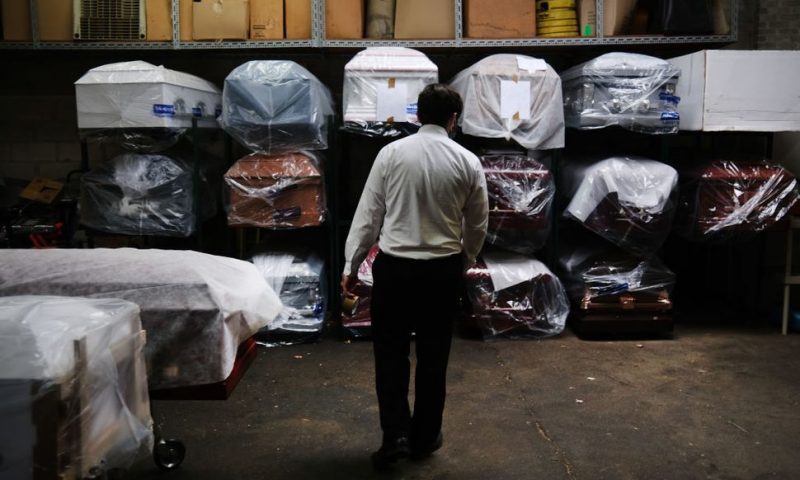 Life expectancy at birth in the U.S. declined by a year and a half in 2020, marking the largest one-year drop since World War II as COVID-19 tore through the country, according to new data from the Centers for Disease Control and Prevention’s National Center for Health Statistics.

In their report released Wednesday, CDC researchers said COVID-19 was tied to the vast majority of the decline, with drug overdose deaths also playing a significant role.

The report contains early estimates of life expectancy for various populations in the U.S., derived from 2020 death records. Though the data is not yet final, it shows a harsher impact of the pandemic on life expectancy than an earlier estimate based on just the first six months of 2020, which depicted a one-year decline. The latest data puts life expectancy in the U.S. at 77.3 years in 2020, a decline from 78.8 years in 2019. The drop brings life expectancy to its lowest level since 2003 and is the largest since a decline of 2.9 years between 1942 and 1943.

Overall, COVID-19 deaths contributed to nearly 74% of the decline, researchers said. Another 11% was attributed to accidents or unintentional injuries. Drug overdose deaths account for more than one-third of such deaths, according to the CDC, and officials last week reported an all-time high of more than 93,000 drug overdose deaths in 2020. Homicide, diabetes and chronic liver disease and cirrhosis also contributed to the decline, which could have been worse if not for decreases in mortality tied to causes such as cancer, heart disease and suicide.

Meanwhile, the life expectancy of Black people in the U.S. declined by nearly three years, from 74.7 in 2019 to 71.8 in 2020, with 59% of this decline due to COVID-19 mortality. At the same time, the gap in life expectancy between Black and white populations grew from 4.1 years in 2019 to 5.8 years in 2020, despite that disparity having narrowed substantially over the past three decades.

Report co-author Elizabeth Arias, a health scientist with the National Center for Health Statistics, says the Hispanic population was among the hardest hit by the pandemic, with the large decline in life expectancy among this group potentially tied to socioeconomic factors such as an inability to telework or to access COVID-19 testing.

And the differences in life expectancy by race and ethnicity are not just indicative of the pandemic’s disproportionate impact on communities of color, but of historic disparities as well, says Dr. Steven Woolf, a professor in the Department of Family Medicine and Population Health at Virginia Commonwealth University and director emeritus of the school’s Center on Society and Health.

“There have been racial and ethnic health disparities for generations in this country, for no reason other than society’s choices,” Woolf says. “There’s no biological reason for people with a certain skin color to die at higher rates from a virus.”

Woolf says these systemic inequities have been responsible for gaps and declines in life expectancy before the pandemic.

“In the years leading up to the pandemic, a historical perspective is really important because people may think that once we get this pandemic behind us, that we can go back to ‘normal’ and not realize that normal is actually a very bad place for the U.S. because of this long-term trend,” he says.

The U.S. also has fared worse than other countries. Woolf recently published his own analysis that put the decline in U.S. life expectancy between 2018 and 2020 at 1.87 years. Other peer countries, Woolf says, saw an average decline of 0.22 years.

“The United States experienced a massive loss of life during COVID-19 that was pretty catastrophic,” Woolf says.

It’s not even clear if eliminating the threat of COVID-19 would return life expectancy rates to pre-pandemic levels, Arias says.

“One of the things that we don’t know is … how the COVID pandemic will affect mortality indirectly,” she says. For example, she says, the result of people forgoing routine preventive care during the pandemic remains to be seen.

“Just the elimination of COVID death may not eliminate the total effects of the COVID pandemic,” Arias says.