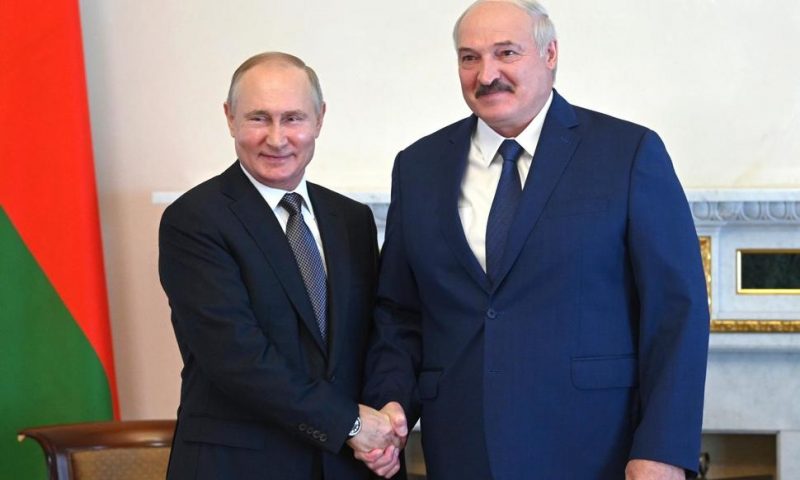 Russian President Vladimir Putin has hosted the leader of Belarus, who has increasingly relied on Moscow’s support amid increasing tensions with the West.

MOSCOW — Russian President Vladimir Putin on Tuesday hosted the authoritarian leader of Belarus, who has increasingly relied on Moscow’s support amid increasing tensions with the West.

Belarusian President Alexander Lukashenko thanked Putin for a “very serious support from Russia” and pledged that the country would duly repay its loans.

Putin, in turn, praised Belarus as a “reliable and stable partner” during their talks in St. Petersburg.

The Belarusian economy, which suffered from the coronavirus pandemic, received a new blow when the European Union has imposed bruising sanctions against some of its top exports over Belarus’ diversion of a passenger jet on May 23 to arrest an opposition journalist.

Lukashenko has denounced the restrictions and announced that Belarus would halt cooperation with the EU on stemming illegal migration in retaliation for bruising economic sanctions.

Lithuania, a EU member which has granted refuge to Belarus opposition figures, has accused Belarusian authorities of encouraging a flow of migrants from Iraq, other Middle Eastern nations and Africa. The EU’s border agency has pledged to step up its support to Lithuania to help stem the tide of migrants.

Belarus was rocked by months of protests, which were triggered by Lukashenko’s reelection to a sixth term in an August 2020 vote that was widely seen as rigged.

The authorities responded to demonstrations with a massive crackdown that saw more than 35,000 people arrested and thousands beaten by police. Leading opposition figures have been either jailed or forced to leave the country.