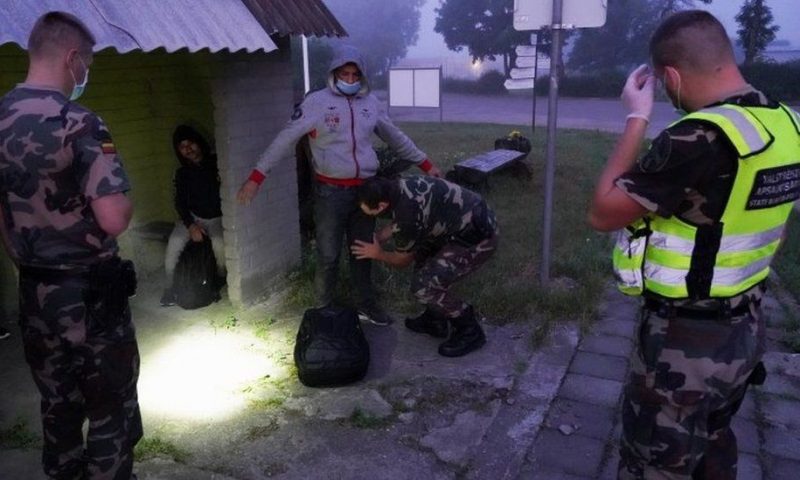 Lithuania has announced it will build a barrier on the border with Belarus and deploy troops to prevent migrants from illegally crossing into its territory.

Prime Minister Ingrida Simonyte said more than 1,000 migrants had been held after crossing along the 679km (422-mile) border since 1 June.

Lithuania, an EU member, also accused Belarus of flying in foreign migrants and allowing them to go to the border.

Bilateral ties have been strained since May’s arrest of a Belarusian dissident.

Roman Protasevich and his girlfriend Sofia Sapega were flying from Greece to Lithuania when a fighter jet was scrambled over Belarus to escort their plane to Minsk airport over a bomb threat which turned out to be fake.

They were detained as soon as the Ryanair plane landed.

Mr Lukashenko, who has been in power for 27 years and is sometimes called Europe’s last dictator, rejects the allegation.

At Wednesday’s news briefing in Lithuania’s capital Vilnius, Ms Simonyte said “an additional physical barrier” would be built on the border with Belarus.

She said this would be “a certain sign and a certain deterrent to organisers of the illegal migration flows”.

“To assist our border officers, our army forces will be used to increase the number of people physically guarding the border,” Ms Simonyte added.

In the whole of last year, Lithuanian border guards detained 81 illegal migrants crossing from its southern neighbour – a far lower number than that seen in recent weeks.

Ms Simonyte accused Belarus of offering migrants flights to the Belarusian capital Minsk, citing evidence found on at least one such person who had reached Lithuania.

“There are travel agencies, direct flights that connect Minsk with Baghdad [Iraq’s capital] for example, and there are agencies both in Belarus and other countries that operate and attract ‘tourists’ to Minsk,” Ms Simonyte told Reuters news agency.

Meanwhile, Lithuanian Foreign Minister Gabrielius Landsbergis said a large number of illegal migrants trying to cross into Lithuania from Belarus had been flown in from Turkey.

He said he had asked his Turkish counterpart to help identify any such arrivals.

The EU has already sent personnel from its from its border agency Frontex to Lithuania’s border to help deal with the growing migrant crisis.

Mr Lukashenko has repeatedly warned that Belarusian authorities will no longer be trying to stop an influx of illegal migrants from abroad to EU members.

“If some think that we will close our borders with Poland, Lithuania, Latvia and Ukraine and become a camp for people fleeing Afghanistan, Iran, Iraq, Syria, Libya and Tunisia they are mistaken,” Mr Lukashenko said on Tuesday.

“We won’t hold anyone, they are coming not to us but to the enlightened, warm and cozy Europe,” he added mockingly.

After Deal, Egypt Releases Ship That Had Blocked Suez Canal