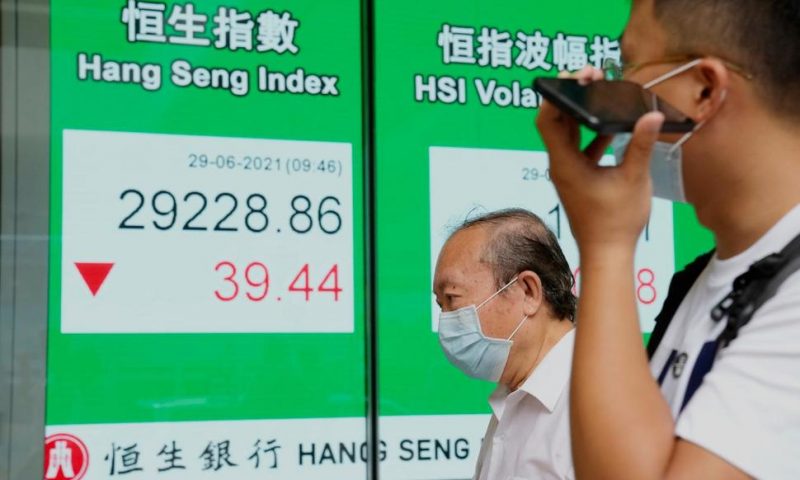 European stock markets have opened higher while Asia declined as investors looked ahead to U.S. employment data for signs of inflation pressure.

Investors are swinging between optimism about a global economic recovery underpinned by coronavirus vaccinations and worry that central banks might feel pressure to withdraw stimulus to cool rising inflation pressures.

Traders are watching U.S. jobs data due out Friday for signs of whether the labor market “will start to show initial signs of heating,” Anderson Alves of ActivTrades said in a report.

The Federal Reserve says it believes a rise in prices of oil and other commodities is temporary. Wage increases can be more lasting.

Also Tuesday, the World Bank raised its forecast of China’s economic growth this year to 8.5% from its April prediction of 8.1%. The Washington-based lender said a full recovery requires progress in vaccinations against the coronavirus.

On Wall Street, the future for the S&P 500 index was off less than 0.1% while that for the Dow Jones Industrial Average was up 0.2%.

On Monday, S&P 500 rose 0.2% to a record as gains for Facebook, Nvidia and other tech stocks offset losses for other industries. The Dow shed 0.4% while the Nasdaq composite added 1%.

The Hang Seng in Hong Kong lost 1% to 28,983.89 after the Chinese territory banned airline flights from Britain starting Thursday in a new effort to prevent the spread of a new coronavirus variant.

Stock prices look expensive to some investors after rising faster than corporate profits. Inflation remains a worry, even if more U.S. investors have come around to the Federal Reserve’s view that it will be only a temporary problem.

Economists expect Friday’s U.S. jobs numbers to show employers added 700,000 more than they cut in June, an improvement over previous months. They also expect the report to show that average hourly earnings jumped 3.7% in June from a year earlier.

In energy markets, benchmark U.S. crude 2 cents to $72.89 per barrel in electronic trading on the New York Mercantile Exchange. The contract fell $1.14 to $72.91 on Monday. Brent crude, used to price international oils, shed 4 cents to $74.10 per barrel in London.

Gas Prices Rise Again, No Sign of Letting up This Summer