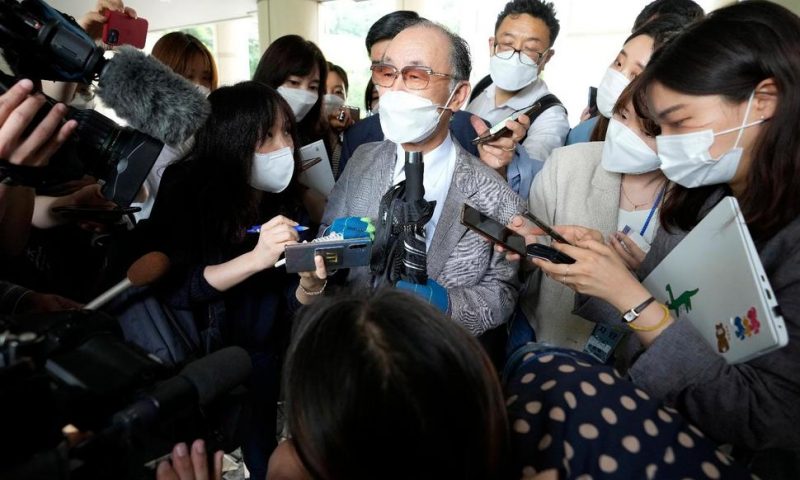 A South Korean court has rejected a claim by dozens of wartime factory workers and their relatives who sought compensation from Japanese companies for their slave labor before the end of World War II.

SEOUL, South Korea — A South Korean court on Monday rejected a claim by dozens of World War II-era Korean factory workers and their relatives who sought compensation from 16 Japanese companies for their slave labor during Japan’s colonial occupation of Korea.

The decision by the Seoul Central District Court appeared to run against landmark Supreme Court rulings in 2018 that ordered Nippon Steel and Mitsubishi Heavy Industries to compensate Korean forced laborers.

It largely aligns with the position maintained by the Japanese government, which insists all wartime compensation issues were settled under a 1965 treaty normalizing relations between the two nations that was accompanied by hundreds of millions of dollars in economic aid and loans from Tokyo to Seoul.

A total of 85 plaintiffs had sought a combined 8.6 billion won ($7.7 million) in damages from 16 Japanese companies, including Nippon Steel, Nissan Chemical and Mitsubishi Heavy Industries.

The court dismissed their civil lawsuit after concluding the 1965 treaty doesn’t allow South Korean citizens to pursue legal action against the Japanese government or citizens over wartime grievances. Accepting the plaintiffs’ claim would violate international legal principles that countries cannot use domestic law as justification for failures to perform a treaty, the court said.

Some plaintiffs told reporters outside the court they planned to appeal. An emotional Lim Chul-ho, 85, the son of a deceased forced laborer, said the court made a “pathetic” decision that should have never happened.

“Are they really South Korean judges? Is this really a South Korean court?” he asked. “We don’t need a country or government that doesn’t protect its own people.”

It wasn’t immediately clear how the ruling would affect diplomacy between the estranged U.S. allies, which have faced pressure from the Biden administration to repair relations that sank to postwar lows during the Trump years over history and trade disputes.

South Korea’s Foreign Ministry said in a statement that it respects the decisions by domestic courts and is willing to engage in talks with Tokyo to find “rational” solutions that can satisfy both governments and the wartime victims.

Japanese Chief Cabinet Secretary Katsunobu Kato said Tokyo was carefully watching the developments in South Korea and hoping that Seoul would take a responsible action to improve ties. He said bilateral relations were still in a “severe condition” because of issues related to Korean forced laborers and wartime sex slaves.

“We believe it is important for South Korea to act responsibly to resolve the outstanding problems between the two countries and we will be watching concrete proposals by the South Korean side aimed at resolving the problems,” Kato said at a news briefing.

The plaintiffs had said the workers endured harsh conditions that caused “extreme” mental and physical pain that prevented them from resuming normal lives after they returned home at the end of the war.

The Seoul court said in its ruling that it had to consider that forcing Japanese companies to compensate the victims would cause significant “adverse reactions” for South Korea internationally.

“A forcible execution (of compensation) would violate the large constitutional principles of ensuring the safety of the country and maintaining order, and would constitute an abuse of power,” the court said, describing its ruling as an “inevitable” decision.

In April, the court issued a similar ruling on a claim by Korean victims of Japanese wartime sexual slavery and their relatives, another sticking point in bilateral relations. In that ruling, the court denied their claim for compensation from Japan’s government, citing diplomatic considerations and principles of international law that grant countries immunity from the jurisdiction of foreign courts.

Relations between Seoul and Tokyo have been strained since South Korea’s Supreme Court in 2018 ordered Nippon Steel and Mitsubishi Heavy Industries to compensate Korean forced laborers. Those rulings led to further tensions over trade when Japan placed export controls on chemicals vital to South Korea’s semiconductor industry in 2019.

Seoul accused Tokyo of weaponizing trade and threatened to terminate a military intelligence-sharing agreement with Tokyo that was a major symbol of their three-way security cooperation with Washington. South Korea eventually backed off and continued the deal after being pressured by the Trump administration, which until then seemed content to let its allies escalate their feud in public.

South Korea’s tone on Japan has softened since the inauguration of U.S. President Joe Biden, who has been stepping up efforts to bolster three-way cooperation among the countries that declined under Donald Trump’s “America first” approach, to coordinate action in the face of China’s growing influence and North Korea’s nuclear threat.

South Korean President Moon Jae-in in a nationally televised speech in March said his government was eager to build “future-oriented” ties with Japan and that the countries should not allow their wartime past to hold them back.