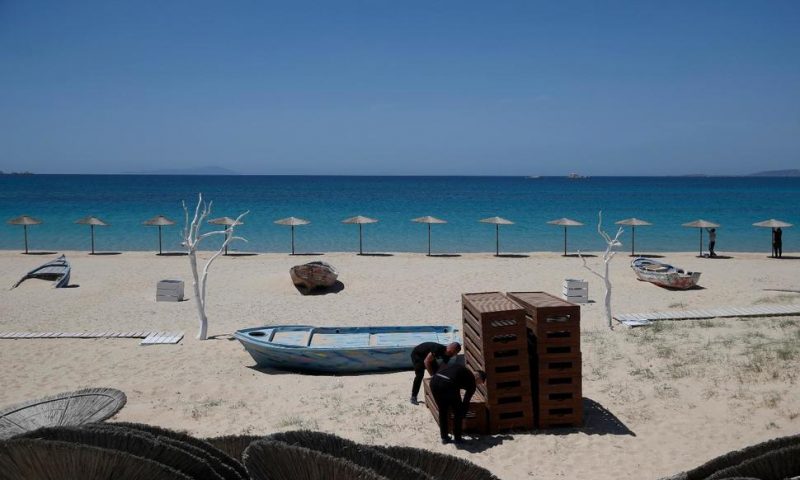 Southern European countries are racing to reopen their tourism services despite delays in rolling out a planned EU-wide travel pass.

NAXOS, Greece — In her kitchen, Kyriaki Kapri has enough food to feed an army. Piles of squid for frying, lemons to be quartered, thumb-thick potato wedges to make oregano-sprinkled French fries, and seafood for the dishes famous on the Greek island of Naxos.

She’s done everything she can think of to prepare for tourists at her Naxos beachside restaurant Gorgona — Greek for Mermaid — but customers are still a rare sight.

Greece launched its tourism season Friday amid a competitive scramble across the Mediterranean to lure vacationers emerging from lockdowns.

“We’re all vaccinated, the tables are outside and spread out, with hand sanitizers on each one. We’re ready. Now we wait,” Kapri said, standing beside large display cabinets with fresh fish on beds of crushed ice. During a six-month lockdown, Gorgona closed for the first time in its 50-year history, a pattern seen across Greece including the nearby island of Mykonos and Santorini.

The European Union has yet to roll out its cellphone-friendly travel pass system. But southern member-states, driven deeper into debt by the pandemic and highly dependent on tourism revenues, are not waiting.

Croatia has already reopened, as has Cyprus, joined Friday by Greece where residents were allowed to leave home without an electronic permit for the first time in six months.

Last year, the number of visitors to Greece plummeted by 78.2% to 7.4 million — from a record 34 million in 2019 — according to official data, with a corresponding drop in tourism revenues.

Greece is hoping to claw back half the 2019 visitor level. It’s vowed to finish vaccinating its entire island population over the next six weeks and will even waive test requirements for tourists who have received vaccines made in Russia and China that are not approved for use domestically.

Other Mediterranean countries are also looking for an edge.

In Turkey, visitors from abroad have been exempt from stay-at-home orders applying to Turks, thus enjoying an empty Istanbul, and little-populated beach resorts. Starting Monday, travelers from China, Britain, Australia, and 13 other countries will be allowed in without even having to present a negative COVID-19 test.

Portugal is the only southern European country to so far make Britain’s so-called Green List of quarantine-free destinations. Travelers in the UK pounced on the news, according to Emma Coulthurst from holiday price comparison site TravelSupermarket.

“Week-on-week, if you compare all package holiday price comparison searches via TravelSupermarket, the site has seen an 865% increase in searches for package holidays to Portugal,” Coulthurst said.

Tourism industry officials in Portugal reported a surge in bookings and inquiries from Britain, and the government confirmed Friday that existing entry restrictions would be lifted before the updated U.K. travel list takes effect Monday, ending days of uncertainty.

In neighboring Spain, Trade and Tourism Minister Reyes Maroto said her government was in “constant” consultations with Britain to try to have its travel status upgraded. Some 18 million U.K. holidaymakers traveled to Spain in 2019.

Italy is dropping a five-day quarantine requirement for travelers from the EU, Britain and Israel starting Sunday, but many in the hospitality industry are still bracing for another tough year.

“I think (tourism) is going to increase but very slowly. For this year we have to accept whatever comes,” said Elisabetta Menardi, manager of the Ca’ Foscolo apartment hotel in Venice.

Just a short walk from the famed Rialto bridge, the hotel is usually fully booked year-round but is currently running at 20% occupancy.

“Normally in January we already get a lot of reservations for the summer. That has stopped. So we don’t know what’s coming now,” Menardi said. “People make reservations, then they cancel. It’s kind of a dance.” _ Derek Gatopoulos reported from Athens, Greece. Zeynep Bilginsoy in Istanbul, Turkey, Barry Hatton in Lisbon, Portugal, Karl Ritter in Rome and Joe Wilson in Barcelona, Spain contributed.