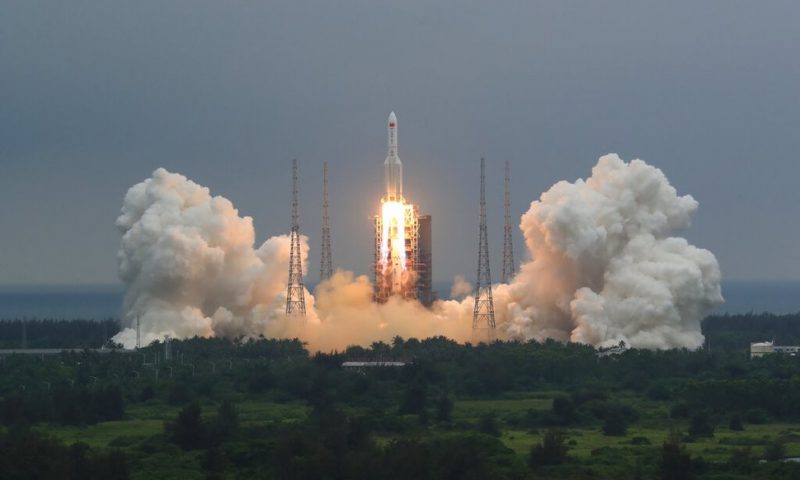 The Defense Department as of Thursday is not planning to shoot down a massive Chinese rocket currently falling uncontrolled toward Earth that is expected to crash down sometime on Saturday or Sunday.

“We have the capability to do a lot of things, but we don’t have a plan to shoot it down as we speak,” Defense Secretary Lloyd Austin told reporters at the Pentagon on Thursday afternoon.

His comments came days after other elements of the military confirmed that the 100-foot Long March 5B rocket, which helped launch China’s first permanent space station into orbit, was no longer under control by Beijing’s space agency – a violation of at least Western standards of space operations.

It also remains unclear where the rocket will land in the coming days – a detail about which Austin had few specifics on Thursday.

“We’re hopeful it will land in a place where it won’t harm anyone – hopefully in the ocean or someplace like that,” Austin said, adding indirect criticism of the Chinese: “For those of us who operate in the space domain, there should be a requirement to operate in a safe and thoughtful mode, and make sure we take those kinds of things into consideration.”

China through its state media on Wednesday blasted “Western hype of the ‘China threat’ in space technology advancement,” citing civilian experts who believe it is “completely normal” for rocket debris to return to Earth and that it will “likely fall in international waters,” offering no official assessment of the potential dangers.

The risk of this falling space debris, however, has raised alarm among many analysts.

“This is not unique. Things come down. What’s unique about this is it’s so large, and the Chinese did nothing to try to control its reentry or mitigate risk,” Todd Harrison, director of the Aerospace Security Project at the Center for Strategic and International Studies, tells U.S. News. “This is evidence that they are a junior space power that hasn’t really figured out how to operate safely and responsibly.”

An 18-ton Chinese rocket fell uncontrolled into the Atlantic Ocean in May near the coast of West Africa, marking the largest piece of space debris to fall to earth since the Soviet space station Salyut 7 in 1991. China’s first space station in 2016 crashed into the Pacific Ocean after officials confirmed they had lost control of it. Three years later, China executed a controlled demolition of its second station, Tiangong-2, in Earth’s atmosphere.

American officials have previously slammed Chinese behavior in space as the burgeoning superpower expands its celestial exploration. In 2007, it tested an anti-satellite missile and successfully destroyed one of its orbiting weather satellites – a message to the world of its new capabilities and a grave concern to Western powers. Incidents like those are allowed, in part, due to relatively few international laws or rules governing space operations.