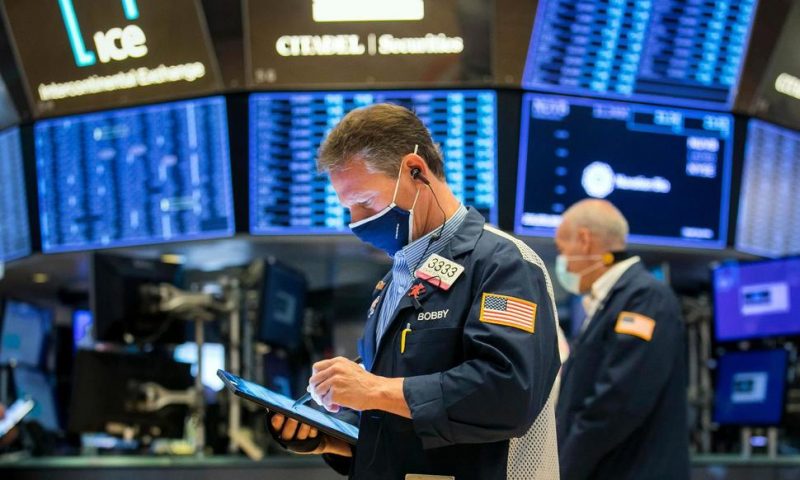 Modest gains for stocks nudged the S&P 500 and the Nasdaq to more record highs on Wall Street as investors brace for a deluge of earnings reports from big U.S. companies.

The S&P 500 rose 0.2%, with only slightly more than half the companies in the index notching gains. Banks and companies that rely on consumer spending were among the winners, outweighing a pullback in household goods makers and health care stocks, among others.

A rally in technology companies, which powered much of the market’s gains in 2020, helped push the Nasdaq to its first record high since Feb. 12. The index fell more than 10% from that peak by March 8, what is known on Wall Street as a “correction.” With Monday’s gain, the Nasdaq has recouped all of its losses from that March slide.

The market’s modest gains came as investors geared up for the busiest week for earnings so far this season. Of the 500 members of the S&P 500 index, 181 will report this week. Ten of the 30 members of the Dow will also release their results.

With millions of vaccines going out daily and trillions of dollars worth of government-led economic support being paid out, investors have turned much of their attention to how well the global economy — and corporate profits — will do in the recovery. Corporate profits in the S&P 500 are expected to be up 24% from this time a year ago, according to FactSet.

Earnings growth is being welcomed by investors who have had to justify high stock values as many companies continue to emerge from a pandemic slump.

“From an absolute perspective, everybody’s expensive,” said Sam Stovall, chief investment strategist at CFRA. “Investors are basically saying we can live with that because they believe earnings are going to be even stronger than currently projected.”

About a quarter of S&P 500 companies have reported quarterly results so far this earnings season. Of these, 84% have delivered earnings that topped Wall Street’s estimates, according to FactSet.

Elevator and escalator maker Otis Worldwide climbed 7% for the biggest gain in the S&P 500 after beating analysts’ first-quarter profit forecasts.

Of the companies to report this week, investors will get results from Apple, Microsoft, Boeing, McDonald’s and others.

The bond market remained relatively stable. The yield on the 10-year Treasury note rose to 1.57% from 1.56% Friday. Bond yields have remained in this narrow range for the past several days, which is a respite for investors after dealing with higher volatility in the bond market earlier this year.

Investors will be looking to the Federal Reserve as the nation’s central bank holds a two-day policy meeting on Tuesday and Wednesday. Investors do not expect interest rates to change for several months, but will be looking for any guidance the Fed has to provide on their thoughts on inflation and the economic recovery.

In addition, the market will be focused Wednesday on President Biden’s prime-time address to Congress and what new details it may bring on plans for a infrastructure package and tax reform.

Even as Economy Heats Up, Fed to Stick With Near-Zero Rates