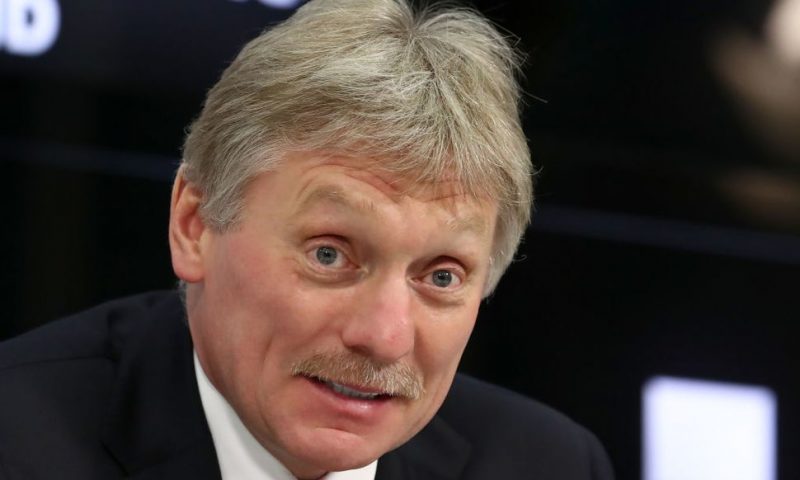 New warnings from the Kremlin follows unconfirmed footage of Russian military equipment flowing toward its border with Ukraine, and growing fears among Western leaders.

RUSSIA ON FRIDAY attempted to justify a military buildup along its border with Ukraine by citing supposed threats posed by NATO, which will require “additional measures from the Russian side to ensure its security.”

Kremlin spokesman Dmitry Peskov issued that warning at a press conference with reporters at a time of heightened tensions between Russia and the West.

Widely shared footage in recent days shows Russian trucks with military equipment and trains laden with tanks and armored personnel carriers flowing toward two particular flashpoints along its border with Ukraine: the ongoing conflict zone in eastern Ukraine known as the Donbass, where local forces face Russian-backed separatist militants – and perhaps Russian troops – as well as the strategically critical Crimean Peninsula, which Russia annexed in 2014 in a move the West deemed illegal.

Though the content of that footage remains unconfirmed, officials from Ukraine, the U.S. and their partners have expressed concern in recent days about an escalation in tensions unseen in recent years. Defense Secretary Lloyd Austin spoke with his Ukrainian counterpart in a call on Thursday in which he “condemned recent escalations of Russian aggressive and provocative actions in eastern Ukraine,” Pentagon spokesman John Kirby said Thursday.

“We certainly call on the Russians to be more transparent about what this is about, but we’ve learned from bitter history not to just take at face value Russian claims of their intentions,” Kirby said.

The call came amid new warnings from other leaders in Russia. Foreign Minister Sergei Lavrov said Thursday, “I very much hope that they will not be ‘incited’ by politicians, who in turn will be ‘incited’ by the West, led by the United States,” adding, “that those who would try to start a new war in Donbass – will destroy Ukraine.”

NATO does not appear to have shifted its posture around or near Ukraine in recent days, though its ambassadors met Thursday to discuss the recent uptick in violence there, including a mortar attack that killed four Ukrainian soldiers earlier this week.

However, Peskov and Russian state news have seized on a Thursday statement from the deputy head of the Office of the President of Ukraine, Roman Mashovets, calling for joint NATO drills to “help stabilize the security situation.”

Peskov responded, “Undoubtedly, such a development of the scenario would lead to a further increase in tension near the Russian borders.”

Those with deep experience countering Russian military threats say its supposed concerns about NATO serve only as a so-called straw man to justify the new military pressure it wishes to impose on Ukrainian President Volodymyr Zelenskiy and his partners.

“This is a fairy tale being put forward by the Kremlin to justify their next steps. They are always talking about how they have no choice but to react to something,” says retired Lt. Gen. Ben Hodges, who commanded the U.S. Army presence in Europe starting in 2014, the year Russia annexed Crimea and began supporting separatist rebels in eastern Ukraine. “But the crisis is entirely of their own making.”

Analysts believe Russia’s provocations in recent days are aimed at pressuring Zelenskiy into making concessions in the ongoing peace process and undermining his legitimacy as leader of the former Soviet state.

“The Kremlin likely seeks to intimidate Zelensky into unfavorable negotiations that exploit his stated desire to reach a settlement and extract concessions such as direct recognition of Russian proxies or the resumption of water supplies to occupied Crimea,” the Institute for the Study of War, which tracks the conflict in Ukraine, wrote in an analysis note late Thursday. It cites recent talks between Putin and the leaders of France and Germany, which the Kremlin has interpreted as a sign that peace talks to advance a July 2020 cease-fire should continue without Ukrainian involvement.

And Russia’s latest moves do not appear to be focused on influencing the Biden administration, the analysis said.

“The U.S. response to these recent Russian military movements is unlikely to provide Putin with any useful indication of how the United States might respond to a more dramatic Russian escalation in the future,” it said. “The Kremlin thus is far more likely to be posturing in support of a Ukraine-focused outcome than orienting on Washington’s response to its actions.”