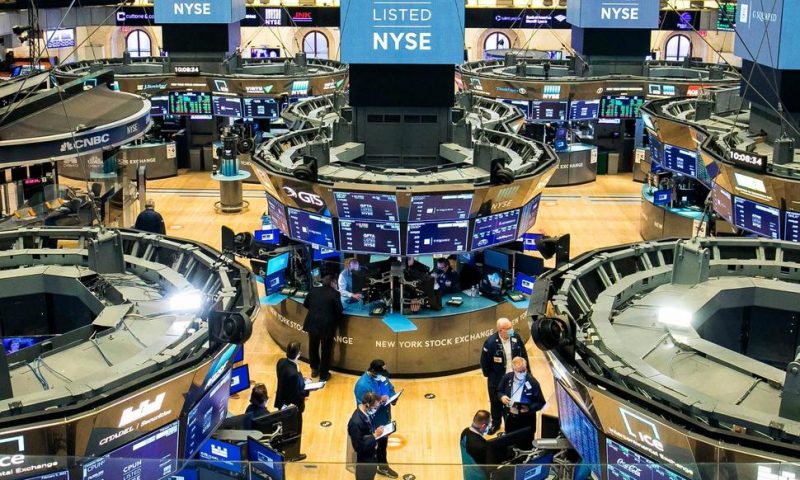 Stocks closed out a winning week with their fifth gain in a row Friday and their biggest weekly increase since November.

Wall Street closed out a winning week Friday as the S&P 500 notched its fifth gain in a row and its biggest weekly increase since November.

The benchmark index rose 0.4% and ended the week 4.6% higher, more than making up for its decline in January. The latest gain nudged the S&P 500 to another all-time high. The Nasdaq composite also capped the week with a record high. Small -company stocks fared even better than the broader market, a sign that investors are feeling more optimistic about the economy.

The market largely shrugged off a dismal jobs report for January that showed the U.S. economy remaining in dire straits due to the pandemic. Investors have been focusing instead on the prospects for another economic boost from Washington. Overnight, the Senate narrowly passed a measure that will fast-track aid.

“It looks as if the Democrats are moving ahead with or without support from Republicans, and that’s helping the market’s tone,” said Quincy Krosby, chief market strategist at Prudential Financial.

Surprisingly good company earnings reports, news that a recent surge in new coronavirus cases is easing, and progress in the distribution of vaccine, have also helped keep investors in a buying mood, she said.

The Department of Labor said Friday that employers added only 49,000 jobs in the month of January, far below economists’ forecasts. The disappointing report came as much of the country remains saturated with coronavirus cases. A report on Thursday showed the number of Americans who filed for unemployment benefits remained well above historic norms.

Service industries continue to be the hardest hit by the pandemic as people continue to refrain from travel and dining out, among other activities.

“In some ways it seems the reopening economy is still struggling a little bit and it’s responsible for quite a few jobs,” Samana said.

Investors are focused on the prospects for more stimulus. President Joe Biden urged Democratic lawmakers this week to “act fast” on his economic stimulus plan. Democrats and Republicans remain far apart on support for Biden’s $1.9 trillion stimulus package, but it appears Senate Democrats will be using their new-found majority to push the measure through without Republican support.

The Russell 2000 index of smaller company stocks climbed 30.91 points, or 1.4%, to 2,233.33, a record high. When the Russell outpaces other indexes it’s a sign that investors are growing more confident about the economy’s growth prospects. The yield on the 10-year Treasury rose to 1.17% from 1.12% late Thursday.

Gains in communications stocks and companies that rely on consumer spending helped lift the market, outweighing a decline in technology sector stocks.

Meanwhile, companies that online investors have clambered to over the past few weeks continued to trade with heavy volatility. GameStop jumped 19.2% to $63.77. That’s far below the high of $483 it reached last week but still well above the $17 it traded at near the beginning of the year.

The rally in GameStop may have been spurred by Robinhood’s move Friday to lift all the restrictions the online trading platform had placed last week on trading in the stock and shares of a few other companies that were hyped on social media and internet forums.