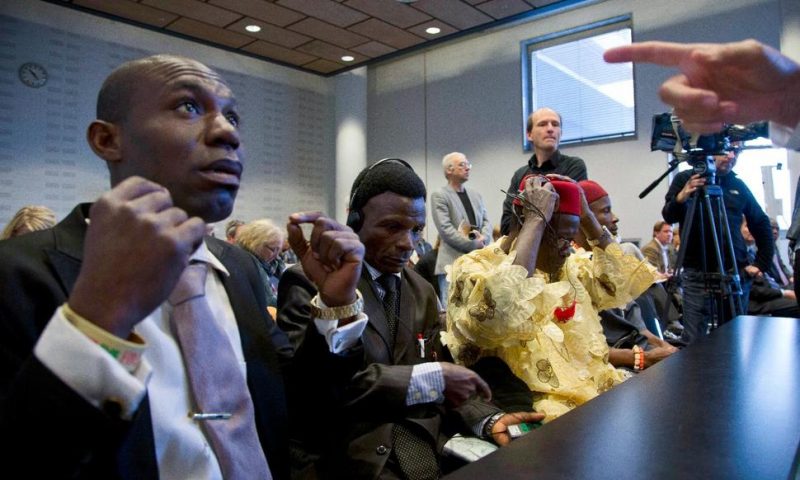 A Dutch appeals court is set to deliver its judgment in a long-running civil case in which four Nigerian farmers are seeking compensation and a cleanup from energy giant Shell for pollution caused by leaking oil pipelines in the Niger Delta.

THE HAGUE, Netherlands — A Dutch appeals court is delivering its judgment Friday in a long-running civil case in which four Nigerian farmers are seeking compensation and a cleanup from energy giant Shell for pollution caused by leaking oil pipelines in the Niger Delta.

The decision, which can be appealed to the Dutch Supreme Court, is the latest stage in a case that is breaking new legal ground in how far multinationals in the Netherlands can be held responsible for actions of their overseas subsidiaries.

Royal Dutch Shell argues that saboteurs are responsible for leaks in underground oil pipes that have polluted the delta. The company also argued that it should not be held legally responsible in the Netherlands for the actions of a foreign subsidiary.

In 2013, The Hague District Court ordered Shell Nigeria to compensate one of the four farmers involved in the case for making it too easy for saboteurs to open a well head that leaked onto his land. However, the court cleared Shell of blame in pollution of the other three farmers’ land and ruled that Shell’s Dutch parent company could not be held liable.

Both sides appealed and judges ruled in 2015 that Shell could be held to account in Dutch courts for its actions in Nigeria. The judges also ordered Shell to give the plaintiffs access to documents that could shed more light on the cause of the leaks and how much Shell management knew about them.

Shell discovered and started exploiting Nigeria’s vast oil reserves in the late 1950s and has faced heavy criticism over the years from activists and local communities over spills and for its close ties to government security forces.

Friends of the Earth, which is supporting the Nigerian farmers in their legal battle, argues that leaking pipes are caused by poor maintenance and inadequate security and that Shell does not do enough to clean up spills.