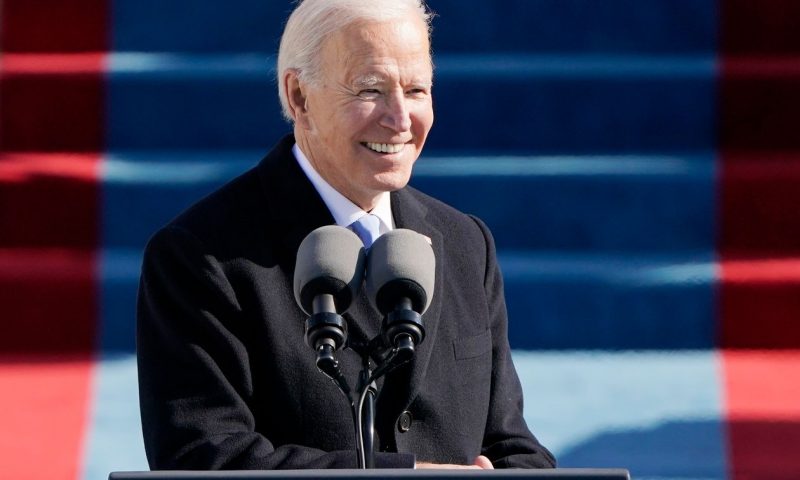 All three major benchmark U.S. stock indexes closed at record highs Wednesday after Joe Biden was sworn in as the 46th U.S. president.

Earlier in the session, a parade of encouraging corporate earnings reports also helped stoke optimism about the path to economic recovery.

How did stock benchmarks perform?

Benchmark stock indexes closed at fresh records Wednesday after Biden was sworn in as president, with a vow to wrestle the ailing economy from the clutches of the pandemic and end a tumultuous four years under the Trump administration. The incoming president also spoke of the need for unity, while pledging to fight for racial justice and to reject extremists and white supremacy.

“We must end this uncivil war that pits red against blue, rural versus urban,” Biden said. “In the work ahead of us, we are going to need each other.”

Last week, Biden earlier laid out plans for a $1.9 trillion COVID-19 relief package, which includes direct payments to Americans and funds set aside for testing and vaccine distribution, to help confront the economic shock from the deadly pandemic.

And on Tuesday, the S&P 500 index snapped a three-session slide after Biden’s Treasury Secretary nominee Janet Yellen endorsed the new administration’s push to “act big,” in terms of providing additional fiscal stimulus to help bridge the economy through the pandemic.

“The market is rallying on hopes for a speedier recovery,” Peter Cardillio, chief market economist at Spartan Capital, told MarketWatch.

But Cardillio also views equity market as “somewhat overbought” and likely due for a pullback, potentially once markets are confronted with the prospects of at least a partial rollback of Trump-era corporate tax cuts and a tighter regulatory environment. “There will come a point in time when the market will reflect on the new administration’s policies,” he said.

Biden likely faces challenges getting his legislative agenda across the finish line with the Senate split 50-50 between Republicans and Democrats, with Vice President-elect Kamala Harris set to provide the tiebreaker.

Biden also will be tasked with healing the country after riots on the Capitol two weeks ago rattled the nation. About 25,000 national troops secured the inauguration event after Trump supporters stormed the seat of government, resulting in five deaths.

“Just the fact that there was a peaceful transition today, that has to reassure people,” said John Carey, director of Equity Income U.S. at Amundi Pioneer, in an interview.

But Carey also views Yellen’s focus on fiscal stimulus, before any tax increases, as encouraging, as well as a the recent string of surprisingly upbeat corporate earnings reports.

“Companies seem to be adapting and figuring out ways to continue doing business,” despite the devastating pandemic, he said. “If companies are able to find ways to make money now, they’ll likely be able to make more money when the COVID situation is no longer such a threat.”

On the policy front, Biden already announced a number of executive orders to reverse some of Trump’s legislation, including rejoining the World Health Organization and the Paris climate accord. He also will end bans on travel from 13 Muslim-majority and African nations.

However, Biden’s main focus will be combating the coronavirus pandemic, as the raging virus in the U.S. registered a grim milestone of 400,000 deaths Tuesday. The U.S. fell short of its goal of vaccinating 20 million people by the end 2020. While the Trump administration’s Operation Warp Speed delivered over 31.1 million doses across the country, only 12.3 million people have received the vaccine.

Andrew Smith, chief investment strategist of Dallas-based Delos Capital Advisors, expects the cyclical rotation into sectors like energy XLE, financials XLF, and materials XLB to continue on further signs of economic recovery, but for any gains for the market as a whole to be a “grind,” until the vaccine rollout becomes more widespread “and we get more clarity on the earnings recovery,” which he thinks could take months.

Biden Halts Oil and Gas Leases, Permits on US Land and Water