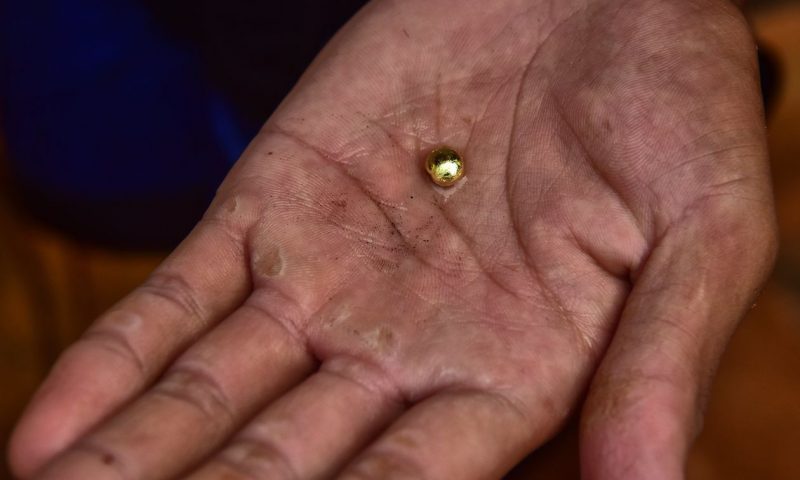 “It was a choppy week for gold as conflicting themes pulled and tugged against the precious metal,” Lukman Otunuga, senior research analyst at FXTM, told MarketWatch. “While bearish investors were inspired by an appreciating dollar and rising bond yields, bulls derived strength from surging coronavirus cases and renewed lockdown restrictions.”

In Friday dealings, the dollar traded up nearly 0.6% at 90.752, as gauged by the ICE U.S. Dollar Index DXY, a measure of the buck against a half-dozen major-developed currencies.

Richer yields and a stronger dollar can dull the appeal of owning dollar-priced bullion.

On Thursday, gold found some support, moving off session lows after Federal Reserve Chairman Jerome Powell said that it isn’t time to consider exiting easy-money policies, as the U.S. combats the economic crisis wrought by the COVID-19 pandemic.

“Now is not the time to be talking about exit,” Powell said in a webcast with Princeton University on Thursday.

“With the Fed Chair pledging to provide ample warning time before any such tapering so as to avoid a repeat of the infamous ‘taper tantrum’ of 2013, gold bulls can take heart from the continued central bank support that should limit the precious metal’s downside for a while longer,” wrote Han Tan, market analyst at FXTM, in a research note on Friday.

On Friday, Minneapolis Federal Reserve President Neel Kashkari said inflation could be rising, but there isn’t much risk of it getting out of control.

Over the long-run commodity analysts remain bullish on gold, particularly on the back of outsize U.S. government spending, which could devalue dollars and buttress gold prices.

Biden’s coronavirus economic relief plan is “likely to fuel speculation around inflationary pressures rising in the United States,” Lukman said. “Gold, which is considered a hedge against inflation may receive a tailwind from the fiscal stimulus.”

Biden’s fiscal plan calls for a round of $1,400-per-person direct payments to most households, a $400-a-week unemployment insurance supplement through September, expanded paid leave and increases in the child tax credit and help for states with the COVID-19 vaccine rollout.

December retail sales fell for a third straight month, down 0.7%. Economists polled by Dow Jones and The Wall Street Journal has forecast a 0.1% decline.

The producer price index increased 0.3% in December, smaller than the forecast for a 0.4% rise. Industrial production, meanwhile, rose 1.6% in December — the largest gain since July. And the first of two readings of consumer sentiment this month fell slightly to 79.2 from 80.7 in December, according to an index produced by the University of Michigan.

Dow ends down over 170 points after disappointing December retail sales