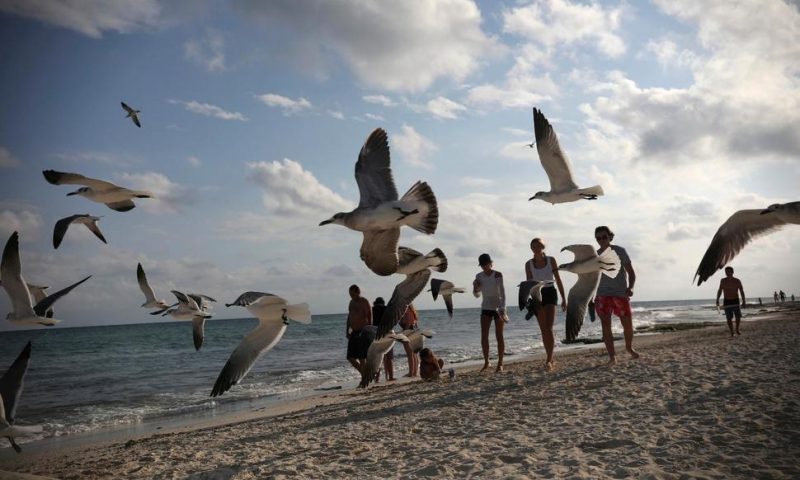 For more than two weeks spanning the end of 2020 and the start of this year, it felt like tourism had returned to Mexico.

TULUM, Mexico — The friends from Jackson, Mississippi, relaxed on lounge chairs dug into a white sand beach and romped in the turquoise Caribbean waters, grateful for a break from the pandemic winter in the United States.

They were among tens of thousands of American tourists who descended on Mexico’s glittering Caribbean beaches at the close of 2020 and start of this year. Quintana Roo state, the country’s tourism crown jewel, home to Cancun, the Riviera Maya and Tulum, received 961,000 tourists during that stretch — nearly half from the U.S. — down only 25% from the previous year.

“You come here and it’s a sigh of relief from all the turmoil of the COVID,” said Latron Evans, a 40-year-old Jackson firefighter.

But concern is spreading that the winter holiday success could be fleeting, because it came as COVID-19 infections in both Mexico and the United States, the main source of the foreign tourists, were reaching new heights — and as a new, more easily spread variant was beginning to emerge in the U.S. If a sharp rise in infections forces a new shutdown of the tourism sector, the effects would be devastating.

Tourism accounts for 87% of Quintana Roo’s gross domestic product, said state Tourism Secretary Marisol Vanegas Pérez. The state lost some 90,000 tourism jobs — only 10,000 of which have come back — and countless others that depend on tourism.

Flights from the U.S. dried up last spring as the pandemic took hold but have risen steadily since then. In December, Quintana Roo was averaging 460 air arrivals and departures per day compared to a pre-pandemic average of 500, Vanegas said.

The increase in American tourists helped compensate for the Europeans, whose numbers remain sharply down. More U.S. tourists came to Quintana Roo during this pandemic-stricken holiday season than a year earlier, when the world was just beginning to learn of the coronavirus. They accounted for 9 out of 10 foreign tourists, Vanegas said.

And they are staying longer, with some seemingly waiting out the pandemic at the beach, she said.

Officials strive to “create a tourist bubble that generates confidence in everything a tourist does,” Vanegas said, describing how the visitors move from the airport to a van to a hotel, and then to tours of sun-splashed archaeological sites certified by state health authorities.

“Where there could be risk is when they leave that bubble,” she said.

For example, the throbbing crowd that packed shoulder-to-shoulder — many not wearing masks — in downtown streets and clubs to ring in the New Year in Playa del Carmen, the lively beach town between Cancun and Tulum.

Indoor venues also pose a risk: Restaurants, theaters, salons and other businesses are permitted to operate at 60% capacity, and indoor gyms at 50%. Hotels can book at 70% capacity.

Evans, the Mississippi firefighter, said he was impressed by the health measures everywhere he went. “They’re taking temperatures when you enter the building and giving you hand sanitizer every place you go,” he said.

His friend, Gearald Green, a 32-year-old music producer from Jackson, where nearly everyone in his immediate circle of friends has been infected, said the climate and outdoor-focused beach living inspired confidence.

“I don’t have to try an extra amount to keep social distance because it’s the beach, it’s water and when you come out it’s not like a lot of people on top of one another,” he said.

Vanegas said the state health department aggressively traces any reported infections. Still, there are worrisome signs. The positivity rate on COVID-19 tests in the state is nearly 50% and the weekly number of COVID-19 deaths quadrupled from the week before Christmas to the week after, according to federal government data.

Health experts fear the increase in travel through the holiday season will likely lead to spikes in places that previously seemed to have it under control.

The southern state of Oaxaca, which draws tourists to its colonial capital as well as its laid-back Pacific beaches, had half the number of tourists this holiday season as a year earlier. State Tourism Secretary Juan Carlos Rivera said that wasn’t bad considering the pandemic.

“We are going to enter in … an economic recession in terms of tourism in the coming months, not only in Oaxaca, in the whole country,” Rivera said.

When the pandemic arrived in Mexico, big hotels started laying off workers with what they called “solidarity breaks.” Workers were told it was temporary, that they’d be hired back in a month and most were let go without the benefits they deserved.

There was little debate over the health risks of promoting tourism versus the economic impact of losing all those jobs, said Alejandro Palafox-Muñoz, a professor of tourism at the University of Quintana Roo. The people who lost those jobs had no choice but to go out and look for new work to feed their families, he said.

Saily Camacho, 25, had worked at a beach club on the island of Cozumel for two years, as a hostess, selling tours and at the cash register. Barely two weeks after the first recorded COVID-19 infection in Mexico, she was out of a job.

Camacho earned commissions from selling tours and could make $110 on a good day. After she was laid off, she lived off her savings for a month, thinking that she’d be hired back. She put finishing her college degree on hold.

Her mother and two siblings lost their tourism sector jobs too. Her mother — and many others — tried to sustain themselves by selling food from their homes via social networks.

Her mother, a hotel chambermaid, finally started a new hotel job this month. After a long search, Camacho was hired as a cashier at a supermarket where it takes her almost two weeks to earn what she made on a good day at the beach club.

“Before, I was working to save for my future, to buy a house, a car,” Camacho said. “And now, honestly, I only work to get by, for food, for expenses.”

She still has concerns about the coronavirus, but admitted that she was buoyed by seeing tourists return. “To see tourists, truly, was something exciting, because it’s the sustenance for the island,” she said.

Germany Says It Has Handed Over 14 Works From Gurlitt Trove