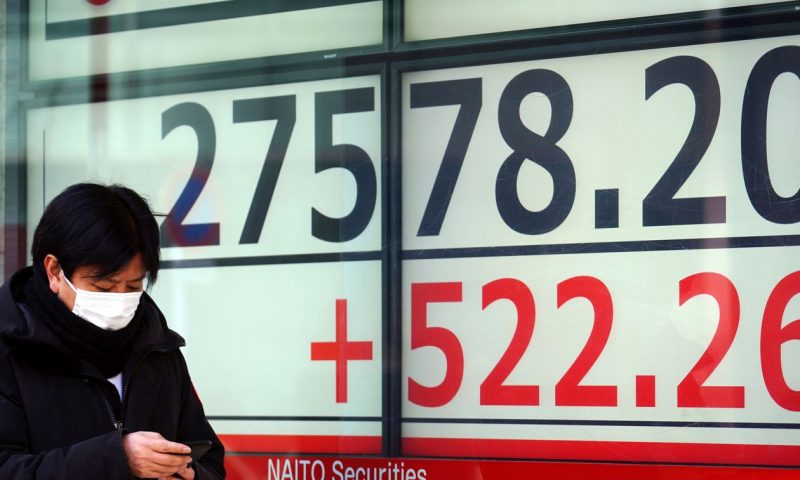 Stocks jump in Tokyo and Seoul, while Hong Kong muted

Shares rose in Asia on Thursday after Wall Street rallied on expectations of more stimulus for the economy, despite chaotic scenes in Washington as Trump supporters stormed the U.S. Capitol.

As Congress reconvened after disruptions to the process for recognizing the outcome of the U.S. presidential election, U.S. futures also were higher, with the contract for the S&P 500 ES00, 1.49% up 0.6%. Futures for the Dow industrials YM00, 1.05% gained 0.4%.

Investors expect that Democratic control of both houses of congress, after Democrats won two runoff senatorial elections in Georgia has raised the potential for increased spending on infrastructure and other areas under President-elect Joe Biden’s administration.

With pandemic restrictions being reinstated in many places as coronavirus caseloads rise, economists and investors have been hoping for more economic aid for Americans and businesses. A strong U.S. economy is needed to help drive a global recovery from the worst downturn in decades.

“Asia markets are going into Thursday with the positive sentiment being the de facto mood and shrugging off the domestic violence that had been seen in the U.S.,” Jingyi Pan of IG said in a commentary.

The Russell 2000 index RUT, 1.61% of small-cap stocks surged 4%, to 2,057.92, a record high. Another round of stimulus for the economy could benefit smaller companies in particular because they tend to have smaller financial cushions to survive long-term downturns.

The rally lost some momentum Wednesday afternoon after the U.S. Capitol building went into lockdown as supporters of President Donald Trump broke through barricades and entered the building following clashes with police. Both houses of Congress abruptly went into recess, interrupting debate over the Electoral College vote that gave Joe Biden the presidency. Earlier, Trump riled up the crowd with his baseless claims of election fraud.

Traders largely looked past the unrest that erupted in Washington and chose to look ahead to later this year, when they expect the prospects for the economy to brighten.

“The market came off the highs by a decent amount, so there was some impact,” said Nate Thooft, head of global asset allocation at Manulife Investment Management. “The markets are taking it in stride because they think it’s a temporary issue that will ultimately be resolved.”

The Nasdaq composite COMP, 2.19%, which is full of tech stocks, shed early gains as investors shifted from the winners of the stay-at-home economy of the pandemic toward companies whose profits would benefit most from a healthier economy. The index fell 0.6% to 12,740.79.

“This is just a market taking into account the likely outcomes from what happened in the election,” said Andrew Mies, chief investment officer at investment advisory firm 6 Meridien. “You have the recognition that the Democratic agenda is probably much more mainstream than people feared.”

A report on Wednesday underscored how fragile the U.S. economy is because of the worsening pandemic. Payroll processor ADP said private employers cut 123,000 more jobs last month than they added. It was much worse than economists’ expectations for job growth, and it was the weakest such report since April. The Labor Department’s more comprehensive report on jobs growth is due on Friday.

Big spending plans for the economy could trigger not only stronger growth for the economy in the future but also heavier borrowing by the U.S. government and maybe even inflation. Those factors helped push up Treasury yields, and the yield on the 10-year Treasury ticket up to 1.05% from 1.04% late Wednesday, having surpassed 1% for the first time since March.

Democratic control of Washington could also lead to higher tax rates for businesses, which would crimp profits and add downward pressure on stocks broadly. But analysts say that given how slim the Democratic majority may be scope for major change is limited. The party will have a 50-50 split in the Senate with Democratic Vice President-elect Kamala Harris providing a tie-breaking vote.

“Investors that have concerns today should probably check some of those concerns,” Levitt said. “The first year of this administration is going to be about providing as much support as possible to an economic recovery.”