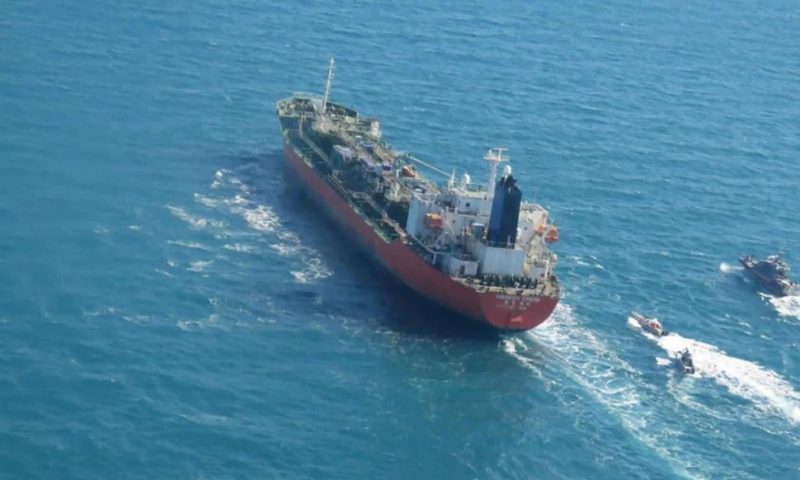 Iran has begun enriching uranium up to 20% at an underground facility and seized a South Korean-flagged oil tanker near the crucial Strait of Hormuz, further escalating tensions in the Middle East between Tehran and the West.

DUBAI, United Arab Emirates — Iran began enriching uranium Monday to levels unseen since its 2015 nuclear deal with world powers and also seized a South Korean-flagged tanker near the crucial Strait of Hormuz, a double-barreled challenge to the West that further raised Mideast tensions.

Both decisions appeared aimed at increasing Tehran’s leverage in the waning days in office for President Donald Trump, whose unilateral withdrawal from the atomic accord in 2018 began a series of escalating incidents.

Increasing enrichment at its underground Fordo facility puts Tehran a technical step away from weapons-grade levels of 90%, while also pressuring President-elect Joe Biden to quickly negotiate. Iran’s seizure of the MT Hankuk Chemi comes as a South Korean diplomat was due to travel to the Islamic Republic to discuss the release of billions of dollars in Iranian assets frozen in Seoul.

Iranian Foreign Minister Mohammad Javad Zarif seemed to acknowledge Tehran’s interest in leveraging the situation in a tweet about its nuclear enrichment.

“Our measures are fully reversible upon FULL compliance by ALL,” he wrote.

At Fordo, Iranian nuclear scientists under the watch of International Atomic Energy Agency inspectors loaded centrifuges with over 130 kilograms (285 pounds) of low-enriched uranium to be spun up to 20%, said Kazem Gharibabadi, Iran’s permanent representative to the U.N. atomic agency.

The IAEA later described the Fordo setup as three sets of two interconnected cascades, comprised of 1,044 IR-1 centrifuges — Iran’s first-generation centrifuges. A cascade is a group of centrifuges working together to more quickly enrich uranium.

Iranian state television quoted government spokesman Ali Rabiei as saying that President Hassan Rouhani had given the order to begin the production. It came after its parliament passed a bill, later approved by a constitutional watchdog, aimed at increasing enrichment to pressure Europe into providing sanctions relief.

The U.S. State Department criticized Iran’s move as a “clear attempt to increase its campaign of nuclear extortion.”

Iran informed the IAEA of its plans to increase enrichment to 20% last week.

Iran’s decision to begin enriching to 20% purity a decade ago nearly triggered an Israeli strike targeting its nuclear facilities, tensions that only abated with the 2015 atomic deal, which saw Iran limit its enrichment in exchange for the lifting of economic sanctions.

A resumption of 20% enrichment could see that brinksmanship return. Already, a November attack that Tehran blames on Israel killed an Iranian scientist who founded the country’s military nuclear program two decades earlier.

From Israel, which has its own undeclared nuclear weapons program, Prime Minister Benjamin Netanyahu criticized Iran’s enrichment decision, saying it “cannot be explained in any way other than the continuation of realizing its goal to develop a military nuclear program.”

“Israel will not allow Iran to manufacture a nuclear weapon,” he added.

Tehran has long maintained its nuclear program is peaceful. The State Department says that as late as last year, it “continued to assess that Iran is not currently engaged in key activities associated with the design and development of a nuclear weapon.” That mirrors previous reports by U.S. intelligence agencies and the IAEA, though experts warn that Iran currently has enough low-enriched uranium for at least two nuclear weapons if it chose to pursue them.

The ship had been traveling from a petrochemicals facility in Jubail, Saudi Arabia, to Fujairah in the United Arab Emirates. The vessel carries a chemical shipment including methanol, according to data-analysis firm Refinitiv.

Iran alleged it seized the vessel over it allegedly polluting the Persian Gulf and the Strait of Hormuz, the gulf’s narrow mouth through which 20% of the world’s oil passes.

The captain “asked why we have to go and be examined and did not get any answer,” Yonhap quoted the official as saying.

In past months Iran has sought to escalate pressure on South Korea to unlock some $7 billion in frozen assets from oil sales earned before the Trump administration tightened sanctions on the country’s oil exports.

The head of Iran’s central bank recently announced that the country was seeking to use funds tied up in a South Korean bank to purchase coronavirus vaccines through COVAX, an international program designed to distribute COVID-19 vaccines to participating countries.

South Korea’s Foreign Ministry demanded the ship’s release, saying in a statement that its crew was safe. The crew included sailors from Indonesia, Myanmar, South Korea and Vietnam, according to the Guard. South Korea’s Defense Ministry said it also was sending its anti-piracy unit near the Strait of Hormuz, which is a 4,400-ton-class destroyer with about 300 troops.

The State Department called for the tanker’s immediate release, accusing Iran of threatening “navigational rights and freedoms” in the Persian Gulf in order to “extort the international community into relieving the pressure of sanctions.”

Last year, Iran similarly seized a British-flagged oil tanker and held it for months after one of its tankers was held off Gibraltar.

The incidents coincide with the anniversary of the U.S. drone strike killing Guard Gen. Qassem Soleimani in Baghdad. Iran responded by launching ballistic missiles at U.S. bases in Iraq, injuring dozens of U.S. troops. Tehran also accidentally shot down a Ukrainian passenger jet that night, killing all 176 people on board.

As the anniversary approached and fears grew of possible Iranian retaliation, the U.S. dispatched B-52 bombers over the region and ordered a nuclear-powered submarine into the Persian Gulf.

Acting U.S. Defense Secretary Christopher Miller said late Sunday that he changed his mind about sending the aircraft carrier USS Nimitz home from the Middle East and instead will keep the vessel on duty. He cited Iranian threats against Trump and other U.S. government officials as the reason for the redeployment, without elaborating.

Last week, sailors discovered a limpet mine stuck on a tanker in the Persian Gulf off Iraq near the Iranian border as it prepared to transfer fuel to another tanker owned by a company traded on the New York Stock Exchange. No one has claimed responsibility for the mining, though it comes after similar attacks in 2019 near the Strait of Hormuz that the U.S. Navy blamed on Iran. Tehran denied involvement.