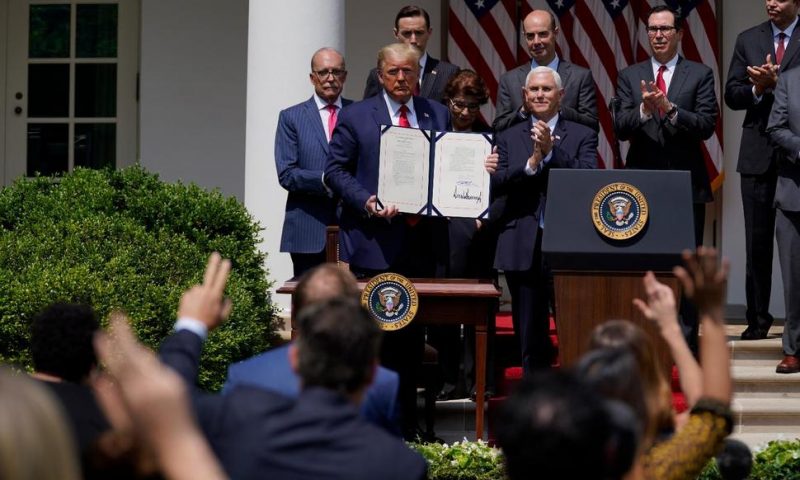 Thousands of minority-owned small businesses were at the end of the line in the government’s coronavirus relief program as many struggled to find banks to accept their applications.

NEW YORK — Thousands of minority-owned small businesses were at the end of the line in the government’s coronavirus relief program as many struggled to find banks that would accept their applications or were disadvantaged by the terms of the program.

Data from the Paycheck Protection Program released Dec. 1 and analyzed by The Associated Press show that many minority owners desperate for a relief loan didn’t receive one until the PPP’s last few weeks while many more white business owners were able to get loans earlier in the program .

The program, which began April 3 and ended Aug. 8 and handed out 5.2 million loans worth $525 billion, helped many businesses stay on their feet during a period when government measures to control the coronavirus forced many to shut down or operate at a diminished capacity. But it struggled to meet its promise of aiding communities that historically haven’t gotten the help they needed.

Congress has approved a third, $284 billion round of PPP loans. While companies that did not get loans previously have another chance at help, according to a draft of the legislation, businesses hard-hit by the virus outbreak will be eligible for a second loan.

The first round of the program saw overwhelming demand and the Small Business Administration approved $349 billion in loans in just two weeks. But many minority-owned firms applied to multiple banks early in the program and were rejected, while others couldn’t get banks to respond to their applications and inquiries.

“Many of our businesses were being turned down in the first and second round of funding. That caused application fatigue and frustration,” says Ron Busby, president of the U.S. Black Chambers, a nationwide chamber of commerce.

That pattern reversed itself over the final four weeks of round two, partly because banks responded to criticism by making it easier to apply for a loan. Over the entire course of the program, the number of loans approved grew and evened out at 14 loans per 1,000 residents in the most ZIP codes with the most and fewest number of white-owned businesses.

Still, minority owners were kept waiting while their companies were in jeopardy.

“Many are hanging on by the skin of their teeth. Most are in the professional services, small retail shops, restaurants, barber shops,” says Ramiro Cavazos, president of the United States Hispanic Chamber of Commerce.

The recent data from the SBA provided a more in-depth look at businesses that received loans than data released on July 6. The earlier data provided only limited details on loans under $150,000; the government initially refused to release more information on those borrowers, citing privacy concerns. The AP and other news organizations successfully sued under the Freedom of Information Act to make data on all PPP loans public, leading to the latest release.

The SBA did not address the timing of loans to minority-owned businesses when asked for comment by the AP. But spokesperson Shannon Giles said in an email that $133 billion, or 25%, of PPP funding had gone to companies in economically disadvantaged areas known as Historically Underutilized Business Zones, and 27% went to low and moderate-income neighborhoods.

The AP analysis shows restaurants slammed by the virus outbreak got the most loans in the first round, but they were followed by businesses in two high-income professions: law firms and doctors’ practices. When the first round ended millions of small businesses were left waiting.

The program’s disparities were apparent from the start. An AP analysis of the initial data release found some of the nation’s largest banks had processed larger loans first. That included loans to well-known and well-financed companies including Shake Shack, Ruth’s Chris Steakhouse and the Los Angeles Lakers. Many have returned the money.

What’s more, the program’s terms helped exclude minority-owned firms. A primary goal for the loans was to allow owners to keep paying employees who otherwise would go on unemployment. So, non-employer firms, or businesses that have owners but no other staffers, weren’t allowed to apply until a week after the program began.

Of the 2.6 million Black-owned companies in business before the pandemic, 2.1 million were non-employer firms, according to the U.S. Black Chambers.

“This program was made available for payroll and so many firms did not have payroll and did not apply,” he says.

Minority-owned and other very small companies were also left out at first because some banks refused to process applications that weren’t from well-established customers with multiple accounts. Many of those banks ended that practice after being criticized publicly. The SBA, which initially had more than 3,000 lenders in the program, eventually brought in 2,000 more banks, non-bank lenders and online lenders, which helped more minority applications get approved as the PPP wore on.

“Many of our Hispanic-owned businesses in the first round never heard back from their banks or were turned down. They had to wait until the second round, and many had to leave their banks and go to a community lender or a nonprofit minority-run agency,” Cavazos says.

Lisa Marsh tried in vain to get banks to process her application. She first applied in June but she couldn’t get answers on her status from her bank, a subsidiary of a big national bank. She also got nowhere with smaller community banks.

Marsh, owner of MsPsGFree, a Chicago-based gluten-free baking business, finally applied through an online lender in late July and got her loan a few days before the PPP ended.

“I was very frustrated and almost gave up,” she says.

Lack of a banking relationship was one of the reasons the New York Federal Reserve Bank cited for disparities in PPP loan approvals to Black- and white-owned companies. The study based on the first SBA data release found that in parts of the country where there were concentrations of businesses owned by Blacks, the percentage of loans was far below the national average. For example, only 7% of companies in the New York City borough of the Bronx and 11.6% of firms in Wayne County, Michigan, where Detroit is located, received PPP loans, compared to nearly 18% of companies nationwide.

“The disparities that were found earlier were really appalling,” Mills says.

The outreach brought in thousands of last-minute applications, the SBA data show.

MBE Capital, a lender focusing on minority-owned companies, received a commitment in mid-May from NBA Hall of Fame member Magic Johnson for funding for $100 million in PPP loans.

MBE loans accounted for nearly a quarter of approvals on the PPP’s last day, according to the AP analysis. More than half of the company’s loan approvals came in the last three weeks of the program. MBE did not respond to requests for comment.

Busby noted that the PPP was supposed to help underserved communities.

“We know that did not happen,” he says.

China Warns of Retaliation for NYSE’s Delisting of Companies