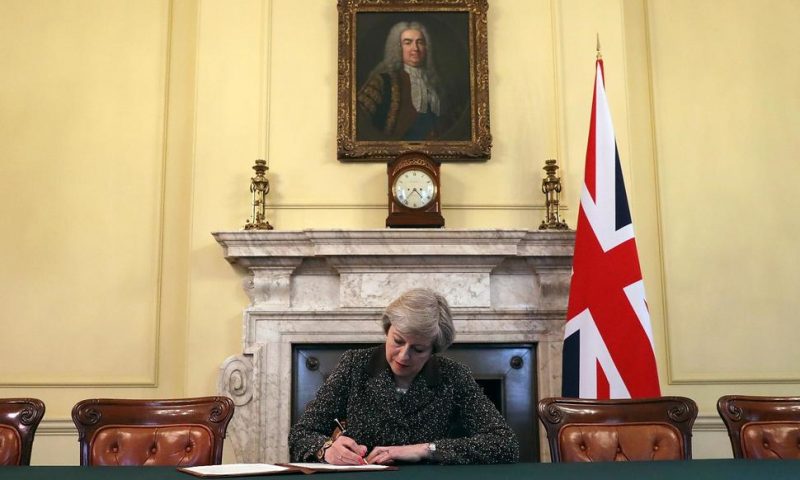 The milestone that started Britain’s departure from the European Union took place on Jan. 23, 2013, the day British Prime Minister David Cameron promised a voter referendum on the U.K.’s continued membership in the EU.

LONDON — A timeline of key events related to Britain’s decision to leave the European Union:

Jan. 23, 2013: British Prime Minister David Cameron promises a referendum on Britain’s membership in the EU if the Conservative Party wins the next general election. He does so to try to garner support among euroskeptics within his own party.

May. 7, 2015: British voters elect a majority Conservative government. Cameron confirms in his victory speech that there will be an “in/out” referendum on European Union membership.

Feb. 20, 2016: Cameron announces that he has negotiated a deal with EU leaders that gives Britain “special status.” He confirms that he will campaign for Britain to remain in the 28-nation bloc. The referendum date is set for June.

Feb. 21: Cameron is struck with a severe blow when one of his closest Conservative allies, the media-savvy Boris Johnson, joins the “leave” campaign.

June 16: One week before the referendum, Labour Party lawmaker and “remain” campaigner Jo Cox is killed by extremist Thomas Mair, who shouted “Britain First” before shooting and stabbing her.

June 24: Cameron says he will resign in light of the results because Britain needs “fresh leadership” to take the country in a new direction.

March 29, 2017: The British government formally triggers Article 50 of the EU’s Lisbon Treaty, setting in motion a two-year process for Britain to leave the bloc on March 29, 2019.

June 8: A general election called by May to bolster her party’s representation in Parliament to help with the Brexit negotiations backfires. Her Conservative Party loses its majority and continues in a weakened state as a minority government.

July 7, 2018: May and her Cabinet endorse the so-called “Chequers Plan” worked out at a fractious session at the prime minister’s country retreat. The plan leads to the resignations of Brexit Secretary David Davis, Foreign Secretary Boris Johnson and others who favor a more definitive break with EU.

Nov. 25: EU leaders approve a withdrawal deal reached with Britain after months of difficult negotiations. May urges the British Parliament to back the agreement.

Dec. 10: May delays the planned Brexit vote in Parliament one day before it is set to be held because it faces certain defeat. She seeks further concessions from the EU.

Dec. 12: Conservative lawmakers who back a clean break from the EU trigger a no-confidence vote in May over her handling of Brexit. She wins by 200 votes to 117, making her safe from another such challenge for a year.

Jan. 15, 2019: The Brexit deal comes back to Parliament, where it is overwhelmingly defeated on a 432-202 vote. The House of Commons will end up rejecting May’s agreement three times.

March 21 EU agrees to extended the Brexit deadline, just over a week before Britain’s scheduled departure on March 29

April 11: Britain and the EU agree for a second time to extend the withdrawal deadline to keep Brexit from happening without a deal in place. The new deadline is Oct. 31.

June 7: May steps down as Conservative Party leader over the stalled Brexit agreement.

July 24: Johnson takes office as prime minister, insisting the U.K. with leave the EU on Oct. 31, with or without a deal.

Aug. 28: Johnson says he will temporarily shut down Parliament until mid-October, giving opponents less time to thwart a no-deal Brexit.

Sept. 3: Rebel Conservative Party lawmakers vote against the government in protest of Johnson’s strategy. They are expelled from the party.

Sept. 5: Johnson asserts he would rather be “dead in a ditch” than ask for another Brexit extension.

Sept. 9: A parliamentary measure that prevents the U.K. from leaving the EU without a deal becomes law.

Oct. 19: Parliament sits on a Saturday and demands to see legislation before approving the deal.

Oct. 29 Parliament votes for a national election at the request of Johnson’, who hopes it will break the Brexit stalemate.

Dec. 12: Johnson wins a large majority in the general election, giving him the power to push through Brexit legislation.

Jan. 31: U.K. officially leaves the EU at 11 p.m., entering an 11-month transition period put in place for the two sides to negotiate a deal on their future relations.

Dec. 9 Johnson and von der Leyen hold a dinner meeting in Brussels to see whether the differences can be bridged. They don’t make a breakthrough but announce negotiations will continue for four more days, setting a Dec. 13 deadline for a final deal or no-deal decision.

Dec, 13: Von der Leyen and Johnson say negotiations will continue, vowing to go the “extra mile” to get a deal.

Dec, 24: The U.K. and EU announce they have struck a provisional agreement, just over a week before the year-end deadline.

What Now for British Economy With UK-EU Trade Deal Reached?