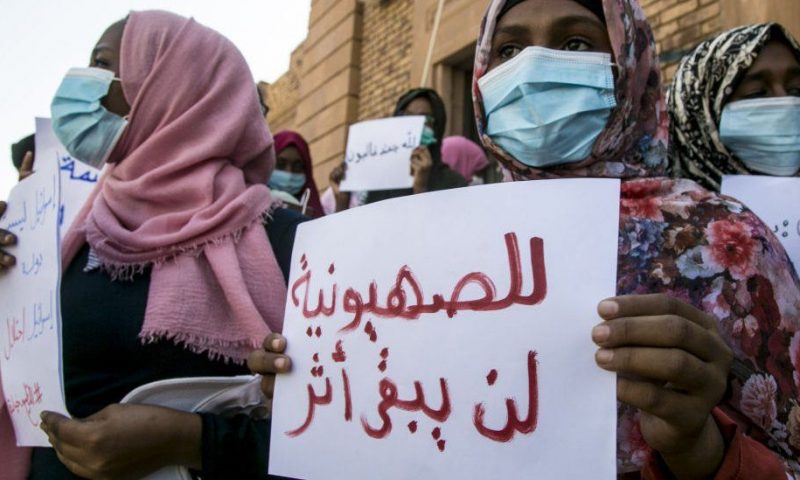 Sudan’s capital, Khartoum, is a city segregated along ethnic lines: its outskirts are inhabited by those who have fled from the war zones in Darfur, the Nuba Mountains and other marginalised communities; the central suburbs are home to the more Arabic-speaking elite.

The city is also known as the capital of the “Three Nos” in the Arab world after it hosted an Arab League summit in 1967 with its the famous resolution to boycott relations with Israel: “No peace, no recognition, no negotiation.”

Yet this hard line has not been shared by all of Sudan’s people as those on the outskirts of Khartoum will attest.

Hundreds of their homes – built of mud and wood – are normally destroyed every year when the rains come.

In recent decades, some are being rebuilt using steel and cement thanks to the money being sent home from relatives seeking refuge in Israel after making the perilous journey across the Sinai desert where Egyptian border guards patrol. Some die in their attempt.

But the temporary refuge granted to those who make it to Israel may be threatened by the deal – negotiated by US President Donald Trump’s administration – to normalise relations between Israel and Sudan, something most Arab nations said would happen only after the Palestinian dispute was settled.

Yet most of them come from places still facing conflict in Sudan.

According to the UN, there are more than 6,000 Sudanese migrants in Israel and the vast majority have not been granted official refugee status.

In fact in the last few years, thousands more have been deported after being forced to choose between living in a camp or going to a third country like Rwanda or Uganda.

One man, who eventually opted to come back to Sudan in 2014, regrets the decision as the returnees are placed under surveillance and have their passports confiscated for five years.

His younger brother, who is currently in Israel and helping the family financially as he has found work at a factory, will not countenance returning.

Some returnees reported being tortured at the hands of Sudanese state intelligence agents.

‘My daughters only speak Hebrew’

Azra el-Nour, who lives in the Israeli town of Arad, agrees she is unwilling to be sent to Sudan. She fled the war in the Nuba Mountains with her family when she was seven years old.

They went to Egypt, where they spent seven years as refugees without any offer of resettlement to a third country.

“My two daughters know nothing about Sudan, even I don’t know much about my country, I left it very young”

“So my father decided that we should go to Israel, and it wasn’t easy we went through a lot to get here,” she told me.

She is now 27 and a mother of two children who only speak Hebrew – none of them have been granted official refugee status.

She is concerned that if they were forced to go back to Sudan for any reason they might face discrimination for living in a country that has long been portrayed in the Sudanese collective imagination as an enemy.

“My two daughters know nothing about Sudan, even I don’t know much about my country, I left it very young, I really don’t know how to live there if we were kicked out from here.”

Thirty-one-year-old Bashir Babikir says he fears being returned to Darfur, where his family still lives in a camp after their village near Kotum was attacked.

“Nothing has been left there, not a bird in my village, we all ran away, many stayed at Kassab camp, the lucky ones who have relatives in Khartoum went to live with them.”

He then left for Israel via Egypt paying Bedouin smugglers – and he is scared of returning given some Sudanese attitudes to Israel.

This can be seen by the recent protests after Friday prayers in Khartoum, with big crowds angered by thoughts of reconciliation with Israel.

It is controversial even amongst some in the civilian coalition which shares power with Sudan’s generals following last year’s ousting of long-term ruler Omar al-Bashir.

Yotam Gidron, an Israeli researcher on Israel-Africa relations, says Israel long supported those in opposition to the government in Khartoum, including rebels in the south.

And at the height of the conflict in Darfur, some rebel movements opened representative offices in Jerusalem.

But the situation is complex for the Sudanese in Israel, who do not feel welcome. Israel says any decision to go home is voluntary – but the migrants face various moves to force them to leave.

For example, the UN says new laws require employers to withhold 20% of net salaries until their departure from Israel.

“If we were sent back to Darfur, we might die, Israel is still an enemy for many people, but also here we are living in terrible conditions,” admits Mr Babikir.