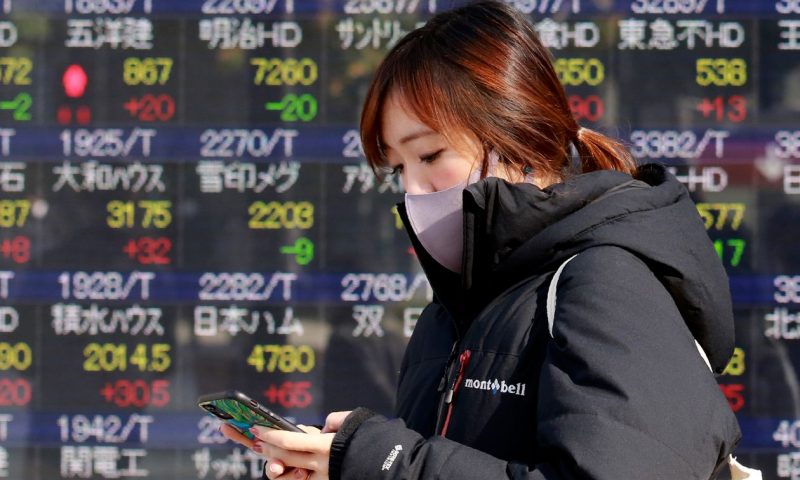 Shares rose in Asia on Wednesday after revived hopes for more aid for the U.S. economy broke a four-day losing streak on Wall Street.

Japan reported weaker than expected export data for November, despite a recovery in trade with China, its biggest market.

Overnight, the S&P 500 gained 1.3% as investors grew hopeful that Washington can get past its partisan divide to deliver more aid to the struggling economy. Technology companies powered much of the rally, which helped push the tech-heavy Nasdaq composite to an all-time high. An index of small-company stocks also set a record high.

Optimism over the economic outlook is rising as approval for a second COVID-19 vaccine may be imminent.

Japan’s Nikkei 225 index JP:NIK gained 0.3% despite the release of data showing exports fell 4% in November, while imports dropped 11% from a year earlier. Exports of vehicles, semiconductors and other manufactured items showed the biggest declines.

In the U.S., negotiations between Democrats and Republicans on another round of coronavirus relief have been dragging on for weeks. Fresh signs of cooperation Tuesday appeared to boost the market’s confidence that Washington can get past its partisan divide and hammer out a deal.

A bipartisan group of lawmakers unveiled a detailed proposal, as meanwhile House Speaker Nancy Pelosi and Treasury Secretary Steven Mnuchin held another round of talks.

A vaccine candidate developed by Moderna MRNA and the National Institutes of Health may be on the cusp of regulatory approval after the Food and Drug Administration said its preliminary analysis confirmed its safety and effectiveness. It would join the nation’s first vaccine, which just began rolling out. Hundreds of hospital and health care facilities will get their first shipments Tuesday of the vaccine developed by Pfizer PFE and BioNTech BNTX.

Small-company stocks did especially well, a sign that investors are feeling more optimistic about prospects for the economy. The Russell 2000 index RUT picked up 2.4%, to 1,959.76, a record high.

Another big gain for Apple AAPL also helped to lift Wall Street. The most influential stock in the S&P 500 because of its massive market value, it rose 5% after a report from Japan’s Nikkei said it may produce more iPhones in the first half of 2021 than analysts had been expecting.

Another round of financial support from Washington could help carry the economy through what’s expected to be a bleak winter, before vaccines help things get closer to normal next year.

The number of U.S. workers applying for unemployment benefits is back on the rise, as governments around the country and world bring back varying degrees of restrictions on businesses. Even without lockdown orders, the fear is that the rising number of deaths will keep customers away from businesses.

Still, the S&P 500 remains near its record set a week ago. Massive efforts by the Federal Reserve have provided another huge underpinning, and the central bank began its last policy meeting of the year on Tuesday. It will announce its decision on Wednesday after already cutting short-term interest rates to nearly zero and indicating it will keep them there for a while even if inflation rises above its target of 2%.

In other trading, benchmark U.S. crude oil CLF21 shed 3 cents to 47.59 per barrel in electronic trading on the New York Mercantile Exchange. It rose 63 cents on Tuesday to $47.62. Brent crude BRNG21, the international standard, gave up 5 cents, to $50.71 per barrel.

Wish prices IPO at $24 to raise more than $1 billion