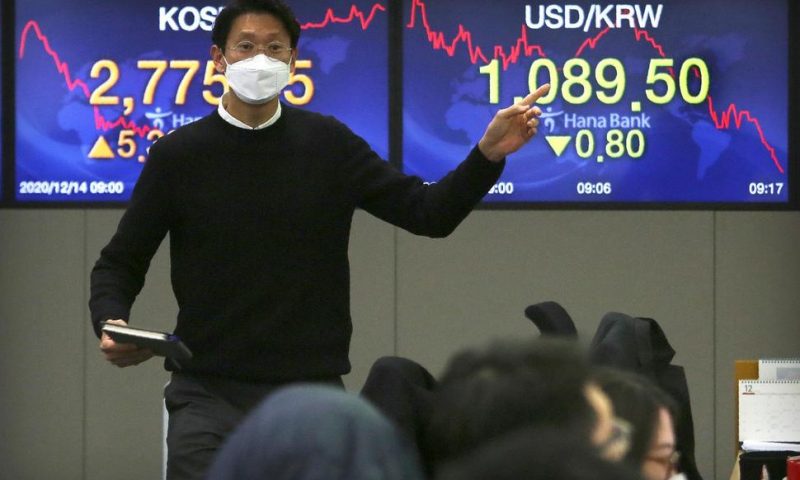 Shares have advanced in world markets as investors watch for developments on Britain’s trade talks with the European Union and on a new round of aid for American businesses and workers.

Shares advanced in world markets on Monday as investors watched for developments in Britain’s trade talks with the European Union and on a new round of aid for American businesses and workers.

The EU’s chief negotiator Michel Barnier said Monday he believes a Brexit trade agreement is possible now that remaining disputes have been whittled down to just two.

Barnier said that the nine-month negotiations had come down to finding settlements on fair-competition rules and fishing rights. Both sides are teetering on the brink of a no-deal Brexit departure. They have committed to a final push ahead of Jan. 1, when a transitional period following Britain’s Jan. 31 departure from the bloc is to end.

Earlier Monday, the quarterly “tankan” survey by the Bank of Japan showed business sentiment has improved sharply with expectations for a recovery from a year-long recession.

The main measure of business conditions of large manufacturers rose to minus 10 from minus 27. Although still in negative territory, it was a marked improvement from the past several quarterly reports as Japan battled the coronavirus pandemic.

The tankan measures corporate sentiment by subtracting the number of companies saying business conditions are negative from those responding they are positive.

U.S. markets ended last week on a downbeat note. Benchmarks pulled further away from their recent highs Friday as prospects for another aid package from Washington faded, while a surge in virus cases is threatening to inflict more damage on an already battered economy.

The proposed $900 billion aid package from a bipartisan group of lawmakers has essentially collapsed because of continued partisan bickering. But there were reports that talks may continue on Monday after President Donald Trump signed a temporary government-wide funding bill into law, averting a federal shutdown at midnight and buying Congress time for the on-again, off-again negotiations on COVID-19 aid.

“Given these talks have been running since July, the market may be bored to tears, but if the stimulus door slam shut before Christmas, it could still change the positive vaccine mood music,” Stephen Innes of Axi said in a commentary.

Treasury yields fell broadly, a signal that traders were seeking to lessen their exposure to riskier holdings. On Monday, the yield on the 10-year Treasury was at 0.91%, up from 0.89% on Friday.

Investors are watching for updates on the rollout of coronavirus vaccines that might help beat back surging infections that threaten to derail recoveries from business shutdowns and other pandemic-related shocks.

The first of many freezer-packed COVID-19 vaccine vials made their way to distribution sites across the United States on Sunday, as the nation’s pandemic deaths approached the horrifying new milestone of 300,000.

Widespread vaccination will take months and the virus pandemic is prompting tighter restrictions on businesses. An already slow economic recovery appears to be stalling in the wake of the latest surge and unemployment is rising.

Wall Street is also waiting for a special election in Georgia in early January, which could potentially switch the balance of power in the U.S. Senate.

In other trading, benchmark U.S. crude oil gained 56 cents to $47.13 per barrel in electronic trading on the New York Mercantile Exchange. It lost 11 cents to $46.57 per barrel on Friday. Brent crude, the international standard, picked up 63 cents to $50.60 per barrel.