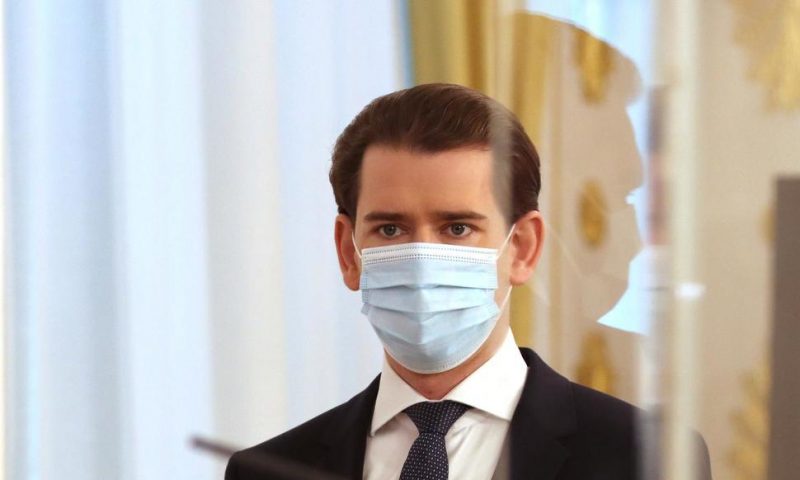 Austrian officials say they will allow skiing to start on Dec. 24, but will limit the capacity of ski lifts and keep restaurants, bars and hotels largely closed until early January.

VIENNA — Austria will allow skiing to start on Dec. 24, but will limit the capacity of ski lifts and keep restaurants, bars and hotels largely closed until early January, officials said Wednesday. It also will require many people entering the country over the Christmas period to go into quarantine.

Tough lockdown measures took effect Nov. 17 and are due to expire on Sunday. Chancellor Sebastian Kurz said a limited curfew that has applied around the clock will be eased, and from Monday will apply only between 8 p.m. and 6 a.m.

Austria has been hard hit by the resurgence of coronavirus infections in Europe, though its infection rate has declined over recent weeks. It currently is recording 335 new infections per 100,000 residents over seven days, down from around 600 last month — but still more than twice as many as in neighboring Germany, which is in a milder partial shutdown.

Kurz said that progress over recent weeks, and the expectation of more before Christmas, allows “cautious” reopening steps. But he said the tourism and catering sectors won’t start reopening until Jan. 7.

That will effectively mean that, over the holiday season, skiing is possible in most cases only on day trips for those Austrian residents who live fairly close to the Alps. Vice Chancellor Werner Kogler said there will be mask-wearing and distancing requirements, and the capacity of cable cars will be limited.

Kurz said that allowing skiing for locals but keeping the catering sector closed is “absolutely justified.”

“Skiing is a sport that takes place in the open air, an individual sport, so epidemiologically it must be assessed differently from catering, where we know that there can time and again be infections,” he said.

Kurz added that he, as a resident of eastern Austria, won’t benefit but “for a large part of our population it will then be possible to go skiing at least for the day.”

France and Germany, which has closed its ski resorts, are pushing for similar measures to be taken in other European countries, like Italy and Spain, for the Christmas season. Ski resorts are already open in neighboring Switzerland, which has allowed skiing.

Kurz rejected suggestions that Austria’s limited reopening was a response to pressure from abroad.

“We decide according to our infection situation, and our expectation is that we can push down our infections very, very strongly by Christmas,” he said.

Austria also plans tougher border controls and quarantine rules in an effort to dissuade people from traveling abroad over the Christmas period. Austrian residents’ summer trips to see relatives in the western Balkans, in particular, were blamed as a significant source of the resurgence of infections this fall.

The quarantine rules will be imposed by mid-December and will apply “if you’re coming from a country that exceeds a certain limit of infections,” Kurz said. Authorities set the limit at 100 new cases per 100,000 residents over 14 days, an infection rate which the vast majority of European countries currently surpass.

The requirement will be for new arrivals to go into quarantine for 10 days, which they can cut short by taking a test after five days, Interior Minister Karl Nehammer said.