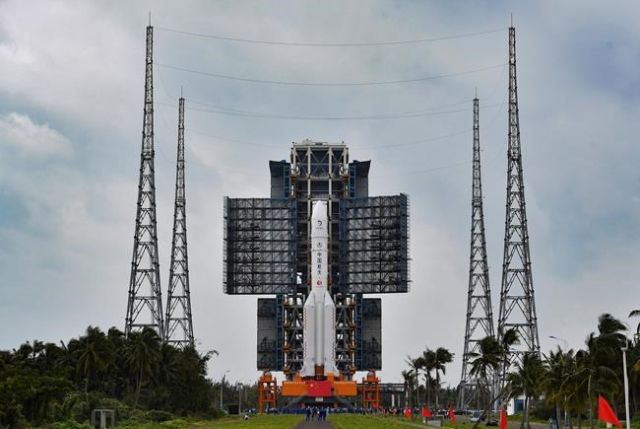 Chinese technicians were making final preparations Monday for a mission to bring back material from the moon’s surface in what would be a major advance for the country’s space program.

Chang’e 5 is China’s most ambitious lunar mission yet and marks the first time in four decades that any country has sought to bring rocks and debris from the moon to Earth. That could boost human understanding of the moon, its age and resources, and of the solar system more generally.

The four modules of the Chang’e 5 spacecraft are expected be sent into space Tuesday aboard a massive Long March-5 rocket from the Wenchang launch centre along the coast of the southern island province of Hainan, according to a NASA description of the mission.

The secretive Chinese National Space Administration has only said that a launch is scheduled for late November.

The mission’s key task is to drill 2 metres (almost 7 feet) beneath the moon’s surface and scoop up about 2 kilograms (4.4 pounds) of rocks and other debris to be brought back to Earth, according to NASA. That would the first opportunity scientists have had to study newly obtained lunar material since the American and Russian missions of the 1960s and 1970s.

The mission is “indeed challenging,” but China has already landed twice on the moon with its Chang’e 3 and Chang’e 4 missions, and showed with a 2014 Chang’e 5 test mission that it can navigate back to Earth, re-enter and land a capsule, said Jonathan McDowell, an astronomer at the Harvard-Smithsonian Center for Astrophysics. All that’s left is to show it can collect samples and take off again from the moon, McDowell said.

After making the three-day trip from Earth, the Chang’e 5 lander’s time on the moon is scheduled to be short and sweet. It can only stay one lunar daytime, or about 14 days, because it lacks the radioisotope heating units that China’s current lunar rover, the Chang’e 4, possesses to withstand the moon’s freezing nights.

Launched as a single space craft, Chang’e 5 is actually composed of a lander, ascender, service module and return capsule.

The lander will dig for materials with its drill and robotic arm and transfer them to the ascender, which will lift off from the moon and dock with the service capsule. The materials will then be moved to the return capsule for the trip home to earth.