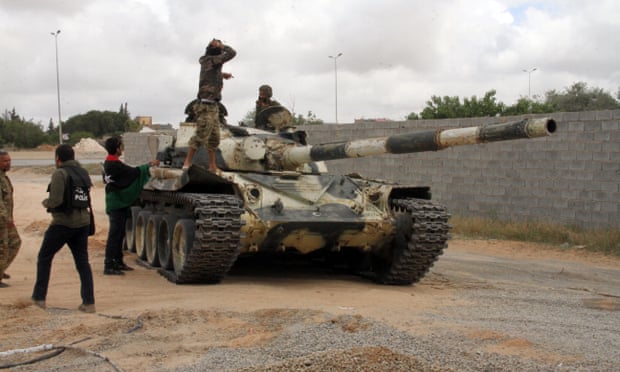 Forces allied with Libya’s UN-supported government have wrested control of a key military base on the outskirts of the country’s capital from Khalifa Haftar, dealing a significant blow to the renegade general’s military and its morale.

Pro- and anti-Haftar media reported that his eastern-based forces had withdrawn from al-Watiya airbase 90 miles south of Tripoli. Footage posted on social media appeared to show Government of National Accord (GNA) forces driving down runways at the base unhindered.

Haftar planned to take Tripoli in a lightning operation in April 2019, but his forces have been mired in fighting ever since. Many of their attacks have been launched from al-Watiya.

His retreat, following other recent military reverses, will force those foreign capitals that back him to review the viability of his plan to overthrow the UN-recognised GNA, which is based in Tripoli.

GNA forces have been mounting strikes against the airbase for weeks, including its supply lines, but over the weekend stepped up the assault by destroying its Russian-made Pantsir air defence system. The airbase had been in Haftar’s hands since 2014.

Turkey, in defiance of a UN arms embargo, signed a treaty with the GNA in November last year, and, in return for Libyan permission to access Mediterranean gas fields, has been supplying military support to the GNA. The bilateral treaty has been sharply criticised by Greece as being in breach of international law and in violation of Greek sovereignty.

The growing Turkish support for the GNA, driven by Ankara’s desire to secure its energy supplies and extend its access to Mediterranean gas fields, has included the supply of both drones and Syrian mercenary forces.

Ankara argues the GNA remains by law the UN-recognised government and says its actions only redress the imbalance caused by the supply of arms and mercenaries to Haftar by the United Arab Emirates, Egypt and Russia. France also unofficially backs Haftar, regarding him as a bulwark against terrorism in the Sahel.

The second air base in the west, Mitiga, is also run by the GNA and Haftar now has no air base in west Libya.

Increasingly many of these assaults are killing civilians and destroying hospital facilities at a time when the country is trying to control a coronavirus outbreak. More than 1,000 have been killed in the year-long battle for Tripoli.

The concern for France and the UAE is that it is possible al-Watiya airfield will become a strategic asset for Turkey, especially if it takes an interest in the country’s southern oilfields. The capture will also free up GNA troops to put pressure on Haftar’s forces south of Tripoli.

Haftar remains in controls of the oil terminals in the east, and has blocked the export of Libyan oil, the lifeblood of the economy. He also appears to have seen off an attempt last month to weaken him politically by dividing him from the leaders of the house of representatives, the parliament based in the east.

The European Union, concerned by migration from Libya to the EU’s southern flank, has just launched a naval blockade of the Mediterranean, codenamed Operation Irini, in an effort to enforce a UN arms embargo. The operation’s structure and composition has been criticised by the GNA and Turkey.

The GNA accused the EU mission of bias since it contains ships from Greece and France, the two EU countries most opposed to Turkey’s involvement in Libya.

The GNA foreign ministry also claims that because the focus is on enforcing the arms embargo by sea, Haftar’s supplies by air and land are excluded from EU attention.

On Friday the Turkish minister of defence, Hulusi Akar, questioned the legality of Operation Irini, arguing it had been launched without consultation with Nato, the UN or the GNA itself.

Akar said: “They only prevent maritime entry and exit. This is not an arms embargo, but rather an embargo on the activities of the legitimate government, which has not asked for that [launching Operation Irini].”

“There is no legal basis for this operation without an official request from the [Libyan] government. Therefore, this only supports Haftar.”

The EU had been in the diplomatic lead trying to negotiate a ceasefire and political agreement between Haftar’s forces based in the east and the GNA forces in the west, but talks staged in Berlin in January foundered, leading to the resignation of the UN special envoy for Libya in March.