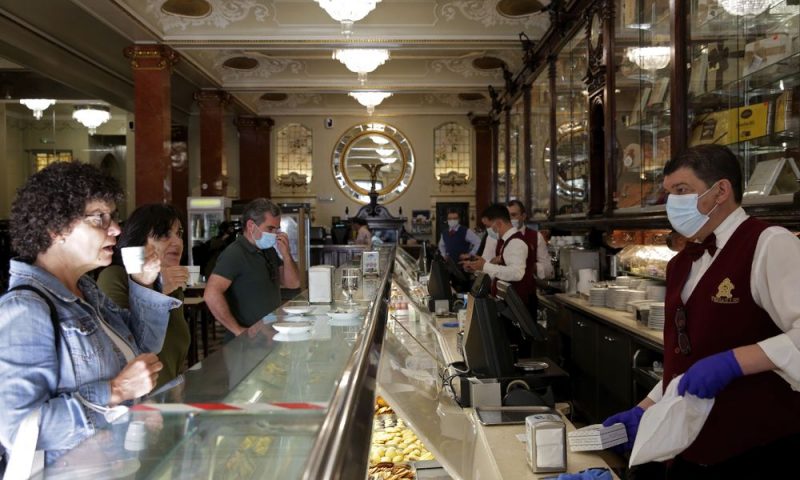 States and companies are either opening, or laying the groundwork for the they day they can as infections fall in some of the hardest hit regions.

The outbreak of the coronavirus has dealt a shock to the global economy with unprecedented speed. Following are developments Monday related to national and global response, the work place and the spread of the virus.

DAY AFTER: States are trying to figure out the safest way to restart their economies despite conflicting guidance out from Washington. The same goes for companies.

— As Apple begins opening stores in the U.S., it will be checking the temperatures of everyone before they can enter and handing out masks to any customer who isn’t wearing one. Like other retailers, Apple will be limiting the number of people inside and doing deep cleanings throughout the day.

The iPhone maker reopened five U.S. stores last week in Idaho, Alabama, South Carolina and Alaska. Another 27 stores will be reopening in California, Washington state, Florida, Colorado, Hawaii, Oklahoma and Arkansas. The stores in California and Washington initially will only offer curbside and storefront service.

Apple so far has reopened about 100 stores worldwide, roughly one-fifth of its brick-and-mortar outlets.

— The Children’s Place plans to reopen stores in 10 states: Alabama, Arkansas, Idaho, Mississippi, Montana, Nebraska, North Dakota, Oklahoma, South Dakota, and Utah. More than 40% of U.S. stores are in areas where they are unauthorized to open again.

TRAVEL & LEISURE: Tourist destinations are beginning to release reopening dates, but there will be new rules in place governing activities and the number of people allowed.

— The Florida Keys will reopen to tourists on June 1, more than two months after the island chain put up check points to limit outsiders. Those will be removed next month, according to Monroe County Emergency Management. Hotels and other lodging establishments will be allowed to reopen at 50% occupancy.

— Allegiant Air said April traffic tumbled 97% and empty seats quadrupled compared with a year earlier. Allegiant is a budget airline that flies people from smaller cities to vacation destinations like Las Vegas, where many of the major attractions were closed to limit spread of the coronavirus.

— Ryanair is cutting around 3,000 jobs and is looking at pulling out of a number of airports in Europe. The budget Irish carrier cut the number of passengers it expects to fly this year from 154 million, too 100 million last week. It cut that again Monday to about 80 million.

— Finland’s national airline, a major carrier between the European Union and China, is adding flights and routes, with long-haul routes beginning in July. Finnair will start in phases, with a strong focus on Asia.

GOVERNMENTS & CENTRAL BANKS: Dozens of economies are either heading for a recession, or area already there. On Monday, that designation become official in Japan. Countries are trying to general economic activity with new parameters.

— Greece reopened the Acropolis in Athens and other ancient sites Monday, along with high schools, shopping malls, and leisure travel. There is some urgency. The EU Commission warned that Greece is likely to suffer the worst recession in the EU bloc this year.

— Ireland is taking its first steps out of lockdown, with some stores reopening and outdoor work resuming. Garden centers, hardware stores and opticians are among the businesses being allowed to open Monday.

— Thousands of people in Bosnia who lost their jobs over the past two months have been blocked by cumbersome and lengthy application procedures from accessing unemployment benefits they had been promised by the government. According to incomplete official statistics, over 30,000 people have lost their jobs in Bosnia since March.

MARKETS: After suffering the sharpest sell-off since mid-March, when the virus spread rapidly in the U.S., Wall Street and global markets appear to be bouncing back.

— Stocks closed sharply higher on Wall Street Monday, extending a global rally amid optimism about a potential vaccine for the coronavirus and hopes for a U.S. economic recovery in the second half of the year.

HOPE RALLY: Shares of the pharmaceutical company Moderna surged 20% after it said that early data from testing of its coronavirus vaccine shows that it helped create immune responses that might help prevent against infection. The company also deemed the vaccine “generally safe and well tolerated” by the individuals who took it.

IRS HELP: The IRS said Monday that it is adding 3,500 telephone representatives to answer some of taxpayer’s questions about economic impact payments. The bulk of the estimated 150 million payments have been sent but some questions remain.

Separately, the Treasury and IRS began to send nearly 4 million of the relief payments by prepaid debit card, instead of paper check. The free, prepaid cards are being distributed to those without bank information on file with the IRS.