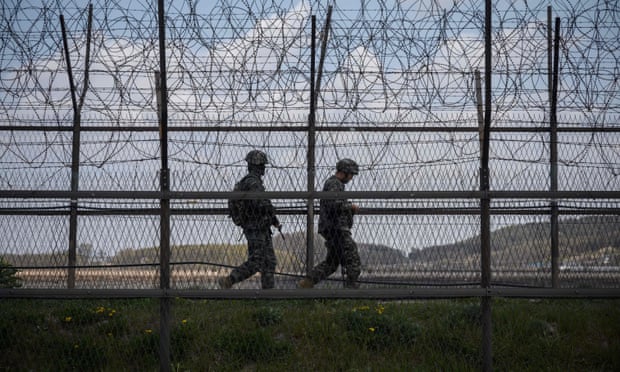 North and South Korea exchanged gunfire over the demilitarised zone between the two nations, South Korean military officials have said.

The exchange began when North Korean soldiers shot at a South Korean guard post at 7.41 am local time on Sunday. The South Korean military shot back twice, Seoul’s joint chiefs of staff said in a statement.

No casualties or equipment damage were reported on South Korea’s side, and it had not been made public whether there were any casualties in North Korea.

South Korea’s military confirmed it found four bullets lodged in the outer wall of a guard post and that its forces fired 10 warning shots towards North Korea. Messages of warning were broadcast to North Korea which said that it had violated the inter-Korean military agreement of 2018 under which the two countries agreed to halt all hostile activities at the border.

South Korea’s joint chiefs of staff said they sent a message to their North Korean counterparts via a hotline to find out more about the situation and to prevent further escalations. So far, North Korea had not offered an explanation.

Speaking to the Guardian on condition of anonymity, a South Korean military official said the shots from North Korea did not seem to have been intentional.

“Visibility was poor due to a thick fog and the shots were fired at the time of a guard change across the border which is when they check their weapons. So, although it was a clear violation of the agreement, chances are it was unintentional. They would have done it in better weather conditions if it had been intentional. Also, North Korean farmers were working their land looking unruffled before and after the shooting.”

The exchange of fire came a day after North Korea broadcast images of Kim Jong-un reappearing in public after a 20-day absence amid intense speculation about his health.

Kim had vanished from the public eye after presiding over a politburo meeting of the ruling Workers’ party on 11 April to discuss the coronavirus. Speculation about his health began after he missed an event on 15 April commemorating the birthday of his grandfather and state founder, Kim Il-sung, something he had never done since inheriting power in late 2011.

Kim Jong-un did not have surgery during his absence from public life, the South Korean news outlet Yonhap said on Sunday, citing a senior government official. The South Korean official declined to provide reasons for believing that Kim did not undergo surgery, but said speculative reports that he may have had surgery, citing some differences in his leg movements, were not true, Yonhap reported.

The demilitarised zone between the two Koreas was established as a buffer following an armistice after the end of the Korean war in 1953. Contrary to its name, it is one of the most heavily guarded borders in the world and skirmishes have broken out between the two countries in the area for decades.

The two Koreas started dismantling frontline guard posts in late 2018 thanks to improved relations but efforts have been halted recently after negotiations to denuclearise North Korea broke down over disagreements regarding the end of US sanctions.

South Korean military said it had ordered all farming activities in the area to be halted and was analysing North Korean bullets found at the scene.

Americans Without Bank Accounts Must Wait for Federal Checks