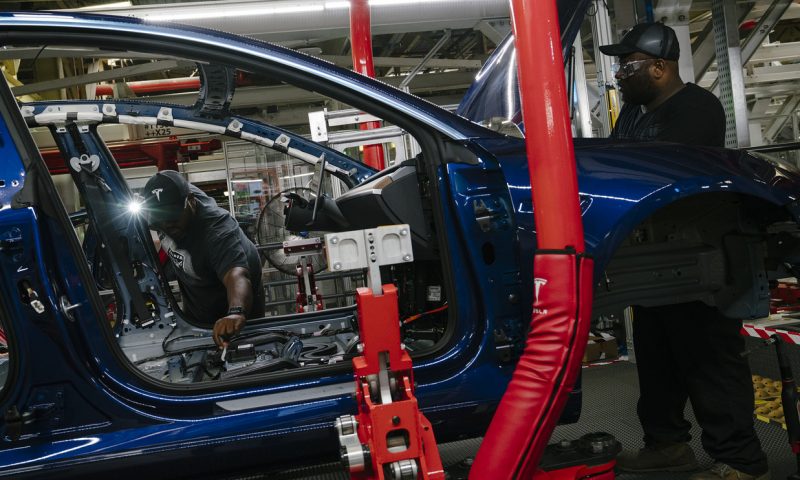 Tesla shares on Monday were poised to end at their highest in two months after a report said the Silicon Valley car maker has told some workers at its only U.S. auto-making factory to prepare to return to work by next week.

Bloomberg News reported over the weekend that Tesla supervisors at the Fremont, Calif., plant told some workers in the factory’s paint and stamping lines to report to the facility starting this week and asked them to signal their availability.

The shelter-in-place order for the San Francisco Bay Area, where Fremont is located, is scheduled to be lifted on May 4. Last month, Tesla and local officials sparred over whether the factory was an essential business, with Tesla resisting calls to shut it down, which it finally did in late March.

Tesla is slated to report first-quarter results on Wednesday, with analysts polled by FactSet expecting the car maker to report an adjusted loss of 27 cents a share on sales of $6.1 billion. That would compare with a first-quarter 2019 loss of $2.90 a share on sales of $4.5 billion, and contrast with late-January estimates that called for a profit around 90 cents a share.

The Bay Area’s shelter-in-place order could be extended and the situation is “fluid,” Wedbush analyst Dan Ives said in a note. But that Tesla appears to be readying its core factory “would be a major boost to its production/delivery hopes and get the growth engines restarted,” he said.

Tesla has kept intact its goal to deliver more than half a million cars in 2020 and investors expect an update on Wednesday alongside quarterly numbers. Hitting that original delivery goal “is a virtual impossibility,” with about 400,000 vehicles more likely, Ives said.

Earlier Monday, General Motors Co. GM, +2.27% halted its dividend and share buybacks in a bid to protect its balance sheet. GM is set to announce its first-quarter results before the bell May 6. Ford Motor Co. F, +6.16% is slated to report its quarterly numbers on Tuesday after the bell.