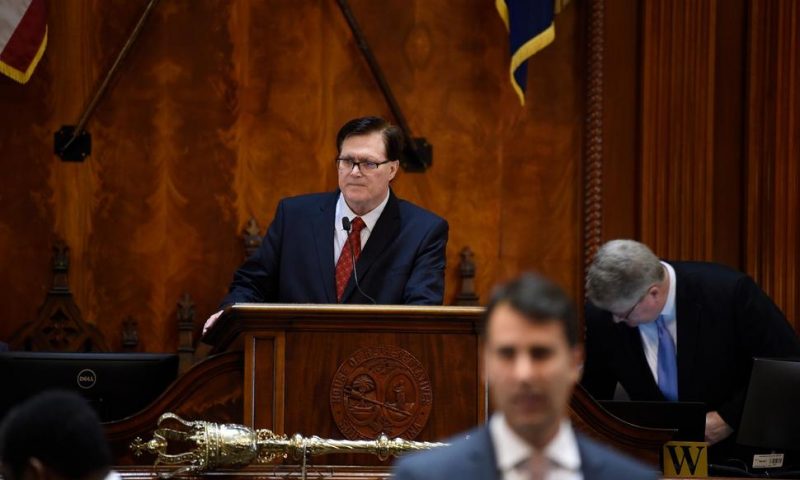 House Speaker Jay Lucas says he sees South Carolina’s opportunity to sell or reform state-owned utility Santee Cooper as a chance to reshape the future of energy in the state.

COLUMBIA, S.C. — House Speaker Jay Lucas sees South Carolina’s opportunity to sell or overhaul state-owned utility Santee Cooper as a chance to reshape the future of energy, at least where he lives.

Lucas is stressing that whoever ends up controlling the utility that directly or indirectly powers nearly half the state needs to move away from massive plants and into markets where energy can bought and sold as needed.

The Republican speaker from Hartsville has at least some authority over what happens to Santee Cooper, since it is owned by the state. But he could also influence potential private buyer NextEra Energy as the House considers reopening negotiations with the massive Florida utility.

“What the House wants to try and do is to move energy markets in this state,” Lucas told The Associated Press on Tuesday. “We think it’s time we leave the vertically integrated model Santee Cooper has operated under to a wholesale energy market at tremendous savings to the people of South Carolina.”

What that might mean is fewer massive power plans costing hundreds of millions of dollars and more reliance on buying power on the emerging wholesale markets, where utilities can get memberships for under $10,000 a year and work out deals with other power providers to buy electricity when needed or sell excess power without a long term contract.

Lucas wants utilities to look toward the future, where the ability to save solar and wind energy in batteries may radically alter the power industry the way natural gas generation has done this century.

But as Lucas and the House continue on a dual path of negotiating a possible Santee Cooper sale and reforming the state utility, the Senate is taking its own route.

A Senate Finance Committee vote Thursday appeared to close the door to a sale and put all the Senate’s efforts into reforming Santee Cooper, appointing a subcommittee to come up with robust reform ideas.

The two chambers will need to reach an agreement on their next steps before the General Assembly’s session ends this year or Santee Cooper will be free to do what it wishes. That prospect that alarms many lawmakers in the state after the utility ended up $4 billion in debt from its minority share in a pair of nuclear reactors that were shuttered during construction.

It also upsets the South Carolina electric cooperatives, who have a contract until 2058 to buy power from Santee Cooper for their 2 million customers, The Electric Cooperatives of South Carolina CEO Michael Couick told senators Thursday.

Couick told senators Santee Cooper ignored warnings from co-ops that the nuclear deal was too risky and signed an ill-fated 60-year contract to sell gypsum, a byproduct from burning coal, to a private company. The gypsum market has turned down and the utility now pays $10 million to keep up its end of the deal.

Couick is on board with Lucas’ thoughts. He asked senators to not just concentrate on what Santee Cooper did wrong, but how they can make things right.

“It’s not just about the failures of the past. It’s about the opportunities of the future,” Couick said.

And that future needs to be nimble and provide the kind of innovative leadership and freedom for Santee Cooper or whoever buys it that the co-ops don’t currently have because of the utility’s poor leadership and that long contract to buy power, Couick said.

Pot Entrepreneurs Flocking to the Bible Belt for Low Taxes